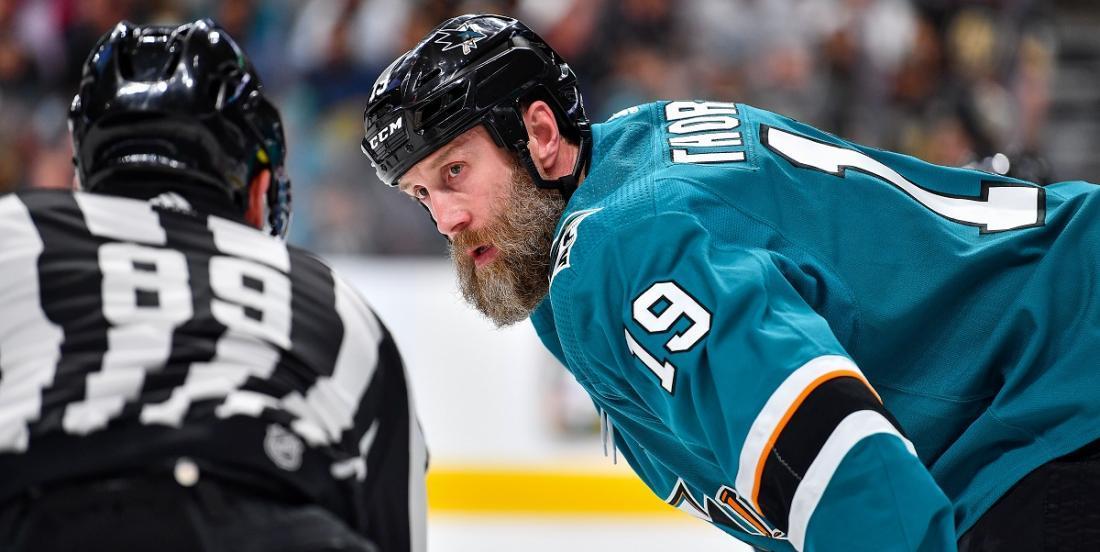 Thornton could be on the move.

The San Jose Sharks have had themselves an abysmal season and now the expectation is that the team will look to be sellers at the upcoming trade deadline for the 2019 - 2020 National Hockey League regular season. Insiders seem confident that players like Brendan Dillon will be moved ahead of that deadline, but there are now rumblings surrounding some of the organizations more veteran players. Specifically the names of both Patrick Marleau and Joe Thornton have started to come up in rumors as of late and with both men likely looking for one last shot at a Stanley Cup Championship it seems likely that they could in fact be moved.

In a recent article for The Athletic, Sharks insider Kevin Kurz named 4 possible landing spots for Joe Thornton, some of which make a lot more sense to us than others. We will be looking at each one of them, in no particular order, and giving you our thoughts on how likely we believe Thornton is to land at each potential destination.

This one makes the most sense to me on paper. Not only have the Lightning resorted to using a rookie center on their 4th line, making Thornton a significant upgrade at that position, but they are an attractive franchise that Thornton could in theory consider waiving his no-trade clause for. The Lightning are a bonafide contender at this point and I could see a world in which Thornton would be willing to accept a trade for a final shot at the Cup.

The Bruins have been looking for an offensive addition all season but although it would be a lot of fun to see Thornton return to his former team for one last run at the Cup, I don't think it would be a priority for general manager Don Sweeney. The Bruins have been linked to bigger fish like New York Ranger Chris Kreider and I could only see this deal happening in the event where the Bruins failed to secure one of their primary targets. That being said Par Lindholm currently centers Boston's 4th line and I could see Thornton being viewed as an upgrade at that position.

Of all the teams named by Kurz I feel this is the least likely scenario. The Leafs have suffered some major losses on the blue line including their minutes leader Morgan Rielly being sidelined for much of what remains of the 2019 - 2020 NHL regular season. It seems obvious that the Leafs have a major need on defense and the acquisition of a player like Thornton certainly would not fill that need. Additionally there is currently no guarantee that the Leafs will even make the playoffs and that I feel would be very attractive for a player in Thornton's current situation.

The Golden Knights are another solid landing spot for Thornton. Of course given the rivalry between the Golden Knights and the Shark this would seem like an outlandish trade, but the Golden Knights are currently being coached but former long time Sharks coach Peter DeBoer. Thornton and DeBoer are intimately familiar with one another and the Golden Knights are not particularly deep up the middle of their line up with players like Chandler Stephenson, Cody Eakin and rookie Nicolas Roy all currently playing center for them. Thornton would certainly be an upgrade in that regard, but whether or not he would be willing to accept a trade to such a bitter rival would remain to be seen,