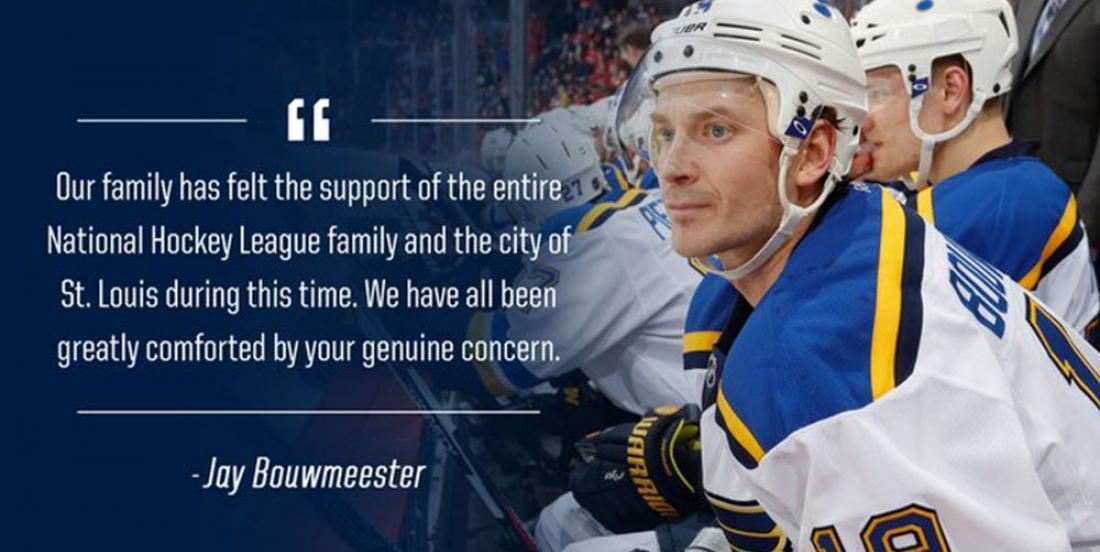 A classy statement from a classy player.

I would sincerely like to thank all of the trainers from both the St. Louis Blues and Anaheim Ducks, as well as all of the first responders, the Anaheim medical staff and the team at the UCI Medical Center for their quick actions on Feb. 11.

Our family has felt the support of the entire National Hockey League family and the city of St. Louis during this time. We have all been greatly comforted by your genuine concern.

On Sunday evening, I returned to St. Louis and I am on the road to recovery. My wife and daughters are forever grateful for everyone's support and we will continue to have a positive outlook for our future.

Bouwmeester, of course, suffered a "cardiac incident" on the bench during his team's game against the Anaheim Ducks last week. Bouwmeester was revived by his team's trainers and medical staff before being rushed to a local hospital. It's nice to see that he's now back at home with his family and recovering from a very serious and scary incident.

Classy move from Bouwmeester to acknowledge the real heroes from that fateful night: the first responders and medical staff. We use the word "hero" in hockey quite a bit, but the truth is that NHL players don't deal with life and death situations on a daily basis. Trainers, paramedics, doctors and do and they deserve to be recognized as the heroes they are. All class from Jay Bo, but really... would you expect anything less from this guy?

At this point, there's no indication whether or not Bouwmeester will be healthy enough to resume his outstanding career. Frankly, there's no indication that he'll even want to. He has nothing left to prove in the game and he has millions of dollars in the bank. He's successful in every measurement and literally NO ONE in the hockey world would begrudge him for hanging up the skates to enjoy health and happiness with his family.

All the best, Jay Bo. Get well soon, brother.