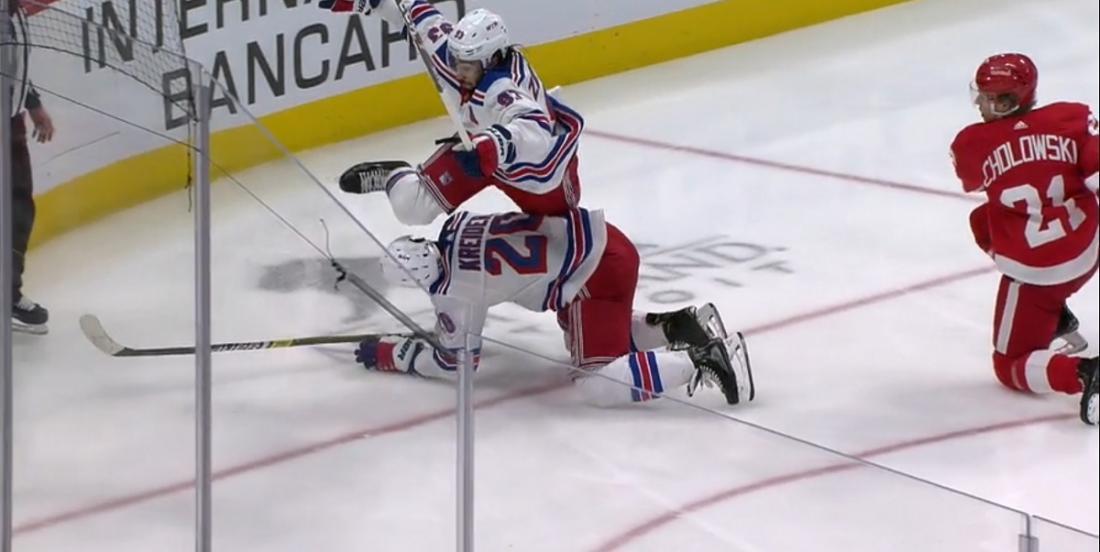 Terrible timing for the Rangers.

This may turn out to be a disaster for the New York Rangers.

The Rangers were facing off against the Detroit Red wings on Saturday night in a relatively meaningless game between two teams that are expected to miss the playoffs this season. Unfortunately for the Rangers however what should have been just another game on the National Hockey League calendar may now have a larger than expected impact on the team moving forward, due entirely to an injury suffered by Rangers veteran forward Chris Kreider.

Kreider was injured on Saturday night when he was the victim of a rather rough looking knee courtesy of Rangers teammate Mika Zibanejad. Obviously this was an accidental knee but unfortunately for Kreider it seems to have been delivered with considerable force in spite of the fact that it was merely a careless act on the part of Zibanejad. To be fair to Zibanejad here the incident occurred as a result of Kreider being down on the ice, sliding on his stomach towards the corner, and trying to get up all at the same time.

Kreider was sliding towards the corner when Zibanejad attempted to turn the corner and unfortunately turned right into the downed Kreider. Both Kreider's attempts to get up and Zibanejad's attempt to quickly get out of the way resulted in Zibanejad's knee being in a perfect position to deliver a devastating blow to Kreider's head as Zibanejad leapt over his fallen teammate. The blow rocked Kreider's head to the side and sent him crashing into the corner where he would remain for several moments, showing signs of being dazed by the blow that he received from Zibanejad. Although Kreider was able to get up to his knees he would remain in the corner for several long moments before eventually getting back to his feet and making his exit to the locker room.

There was no question following the incident, and given Kreider's body language, that he would be entered into the NHL's concussion protocol and that could be very bad for the Rangers. Kreider is considered by many to be the biggest potential trade target ahead of the upcoming NHL trade deadline, but if he turns out to be injured it will seriously damage the Rangers hopes of pulling off a trade of that nature.