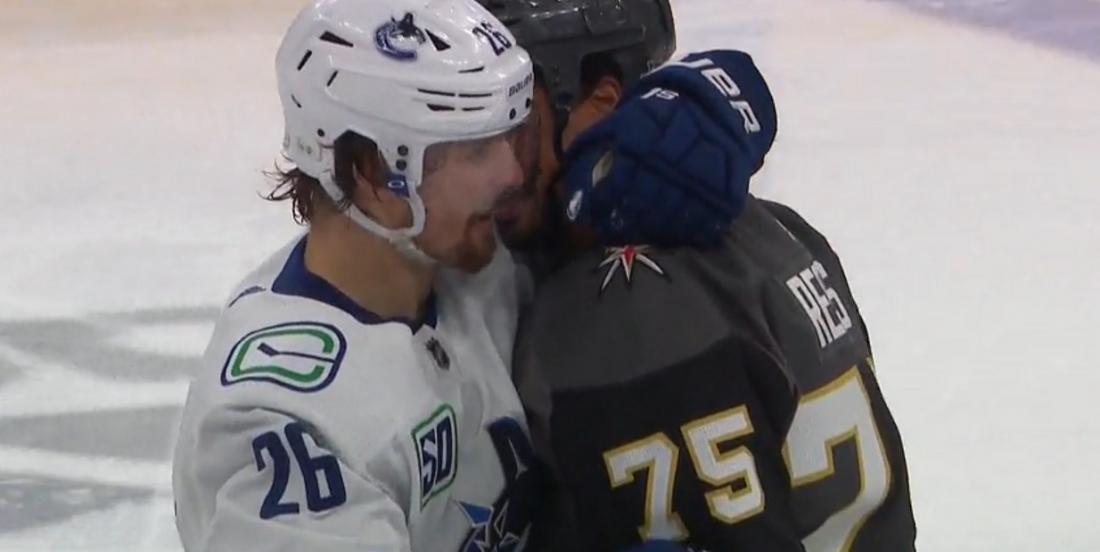 The National Hockey League's officials currently overseeing the second round series between the Las Vegas Golden Knights and the Vancouver Canucks have come under scrutiny after a bizarre pair of penalties over the course of the first 3 games of the series.

On Saturday the Golden Knights and the Canucks faced off for the third time and it was during the latter stages of that game that veteran Canucks forward Antoine Roussel was hit with a 10 minute misconduct. Now I am not in the habit of defending Antoine Roussel, the man is infamous in the NHL for good reason and he has earned the reputation that has made him one of the league's most well known agitators on the ice, however this was an extremely weak call for a playoff game.

First let's look at what led to the misconduct in Game 3:

Pretty weak stuff for a 10 minute misconduct right? Now to be completely fair to the officials it may have been the final straw in a long string of warnings for Roussel, or it may even have been that he did something or said something that he had been specifically instructed not to do or say by the officials. It is important to keep this in mind and not judge the officials too harshly, but the fact that Roussel received a similar misconduct earlier in the series does make it seems like he is being specifically targeted by those officials.

Earlier in the series Roussel, who has been battling with Las Vegas Golden Knights forward Ryan Reaves, was given the other 10 minute misconduct for what amounted to chirping and hugging Reaves, also a fairly weak call in my estimation. I argued in defense of the officials at the time suggesting that the position of Roussel's stick at the start of the exchange may have led them to believe he was spearing Reaves, although that was clearly not the case.

Here is the misconduct Roussel was previously assessed in this series:

Although fans in Vancouver understand Roussel's reputation and the limitations that reputation can create, I can understand why they feel their player has been treated unfairly in this series.

Has Roussel been given a raw deal thus far? Does he deserve special treatment? Let us know your thoughts in the comments.