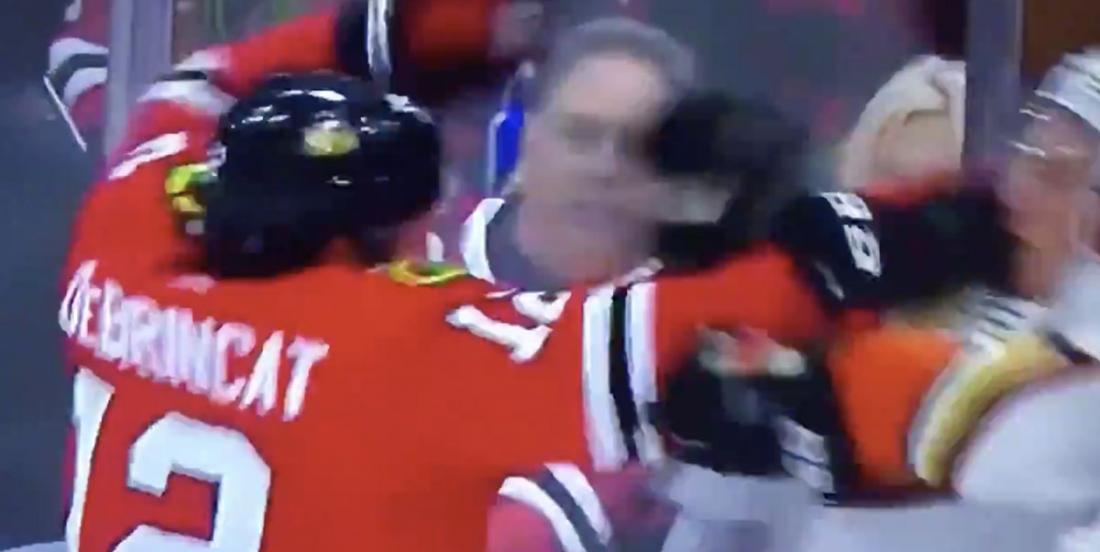 There are a lot of good words to describe the talents of Chicago Blackhawks forward Alex DeBrincat. He spent three seasons between 2014 and 2017 absolutely dominating the Ontario Hockey League as one of the most productive scorers and has been channeling what he learned back then since he was selected in the 2016 draft class. He was picked in the second round, 39th overall because he was undersized. Well, he sure proved on Tuesday night that he does not matter what size you are, and added the word sassy to the list of characteristics that make him such a great player in the Windy City.

The Hawks were facing the Anaheim Ducks on Tuesday night and things got heated up in the second period as team were tied 1-1. DeBrincat, who collected an assist of the first goal of the game, was going hard at the puck trying to beat John Gibson in the zone when he felt Josh Manson was taking up too much room. Instead of stepping aside, like most players who are written up as 5”7 and 165 pounds would have done, he went straight at Manson.

Let’s be clear here: DeBrincat dropped the gloves, ready to fight a gritty blue liner, who is eight inches taller and 50 pounds heavier than him. According to NHL.com, Manson strands at 6-3, 216 lbs…

Let’s see what the fight looked like and notice how DeBrincat did not back down when Manson’s teammate Ryan Getzlaf came into the brawl, from behind to hold his head as the Hawks star forward keeps punching and hitting Manson.

It did not take long for fans to notice the size difference between the two men and to applause DeBrincat’s courage to stand up for himself in the scrum. Some called him sassy, other catty, however this fight sure got the attention of many fans across the NHL. A few fans called it the classic David against Goliath.

Both players were sent to the penalty box for roughing on the sequence. Some fans revealed on social media that DeBrincat was still chirping at Manson from the sin bin following the fight.

According to Charlie Roumeliotis of NBC Sports Chicago, Edmonton Oilers captain and star forward Connor McDavid once told him that DeBrincat has a thing for getting into fights with guys that are much bigger than he is. But he keeps going it…

“When he was a rookie and I was playing with him, he’s going into scrums against guys that are 6-5, and you’re on the ice thinking, ‘How the hell am I going to help you?’ He definitely picks his fights.”

“He’s one of the feistiest guys I’ve ever played with.”

We know fans appreciated the feistiness of DeBrincat, and because he wasn’t injured on the play, we are pretty sure Hawks head coach Joel Quenneville liked to see that fire in his young player’s eyes this early in the season.

In the end, DeBrincat might have inspired his teammates: the Hawks topped the Ducks 3-1 to record their fifth win of the season.

"I've never seen him like that. Now I'm pretty scared of him," said teammate Erik Gustafsson after the contest.