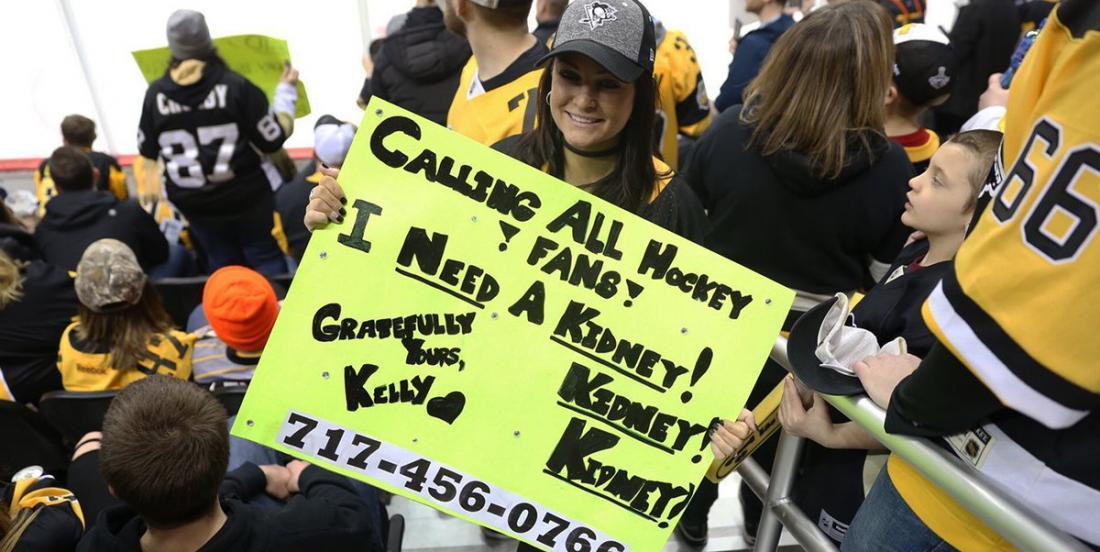 Hockey surely brings people together, and it's definitely makes this story so special.

Pittsburgh Penguins fan Kelly Sowatsky was in desperate need of a kidney transplant. The young woman decided to take a leap of faith as she attended a Penguins game against the Montreal Canadiens on March 31, 2018 with her plea inscribed on a sign: "Calling All Hockey Fans! I Need A Kidney! Kidney! Kidney! Gratefully Yours, Kelly."

Andi Perelman, who oversees the Penguins' social media, noticed the neon sign at the game and posted the picture of Kelly and her homemade sign on the team's official handle. Of course, fans were moved and looking to help and the story went viral.

Nearly 300 miles away in Delaware another Penguins fan, Jeff Lynd, saw the tweet and offered to donate his kidney. It took eight months for everything to come to fruition, but on Nov. 6 doctors at UPMC performed kidney transplant surgery. Both Sowatsky and Lynd are doing well two weeks after the procedure.

"There's no words to really express the gratitude and the way I feel about what (Lynd) did for me because he literally saved my life," Sowatsky said. "And the doctors, too. If you trickle it down, the Pittsburgh Penguins are the reason my life is being saved, too. If it weren't for (Perelman) and for me loving the Penguins ... "

"They got me through some really rough days in the last couple of years with how sick I felt," she said. "It didn't matter how bad I was feeling, I always felt better when I watched the Penguins play."

Sowatsky will get to watch the Penguins play again in the future as the team has invited Kelly and her family as well Lynd's family to attend an upcoming morning skate and game in a suite. The date hasn't been determined, pending final clearance from the doctors, but Sowatsky is excited nonetheless.

"I can't wait," Sowatsky said. "I'm so stoked. I never dreamed that this would lead to anything that is about to happen. I'm going to fangirl so hard that it's probably not going to be funny. I'm obsessed with the Pens."

Now, the two Penguins fans are linked together by this homemade sign, and this beautiful story.

"There are no words," said Jackie Sowatsky, Kelly's mother. "It's just mindboggling for me as a parent, as her mom, her caregiver that a simple sign did so much for Kelly. And that the Pittsburgh Penguins actually caught the sign and made the information available. For her to get a donor off of that sign, I get choked up every time I think about it.

*Details of the story were provided by NHL.com