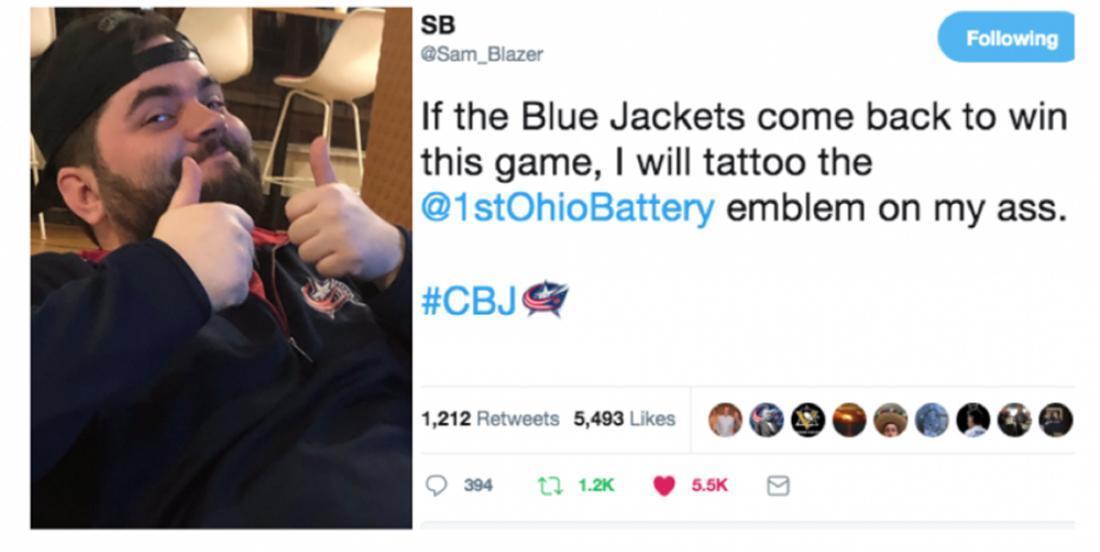 In case you missed it last night, the Columbus Blue Jackets scored an improbable comeback victory over the Toronto Maple Leafs with a 4-3 overtime win. The Jackets were down 3-0 midway through the game, but a goaltending change from head coach John Tortorella seemed to spur his team on to victory. Rookie goalie Elvis Merzlikins was rock solid in relief of starter Joonas Korpisalo, stopping all 21 shots he faced.

It was an incredible, improbable victory that left fans completely flabbergasted. But... maybe we shouldn't be so surprised?

After all, it was this same Blue Jackets team who came back from 3-0 against the Tampa Bay Lightning in Game One of their playoff series last post-season. The Jackets, of course, went on to sweep the Lightning in the biggest first round upset in NHL history. Remember?

I tell you one Blue Jackets fan who remembers... Same Blazer.

The diehard Jackets fan went viral last playoffs when he tweeted this at intermission (keep in mind the Jackets were down 3-0 after one period):

Well... guess what? The mad man actually did it. HE ACTUALLY DID IT.

While we don't have, and frankly wouldn't want to see, photographic evidence we'll just have to take his word for it. So what did Blazer do last night when his team was down 3-0 once again?