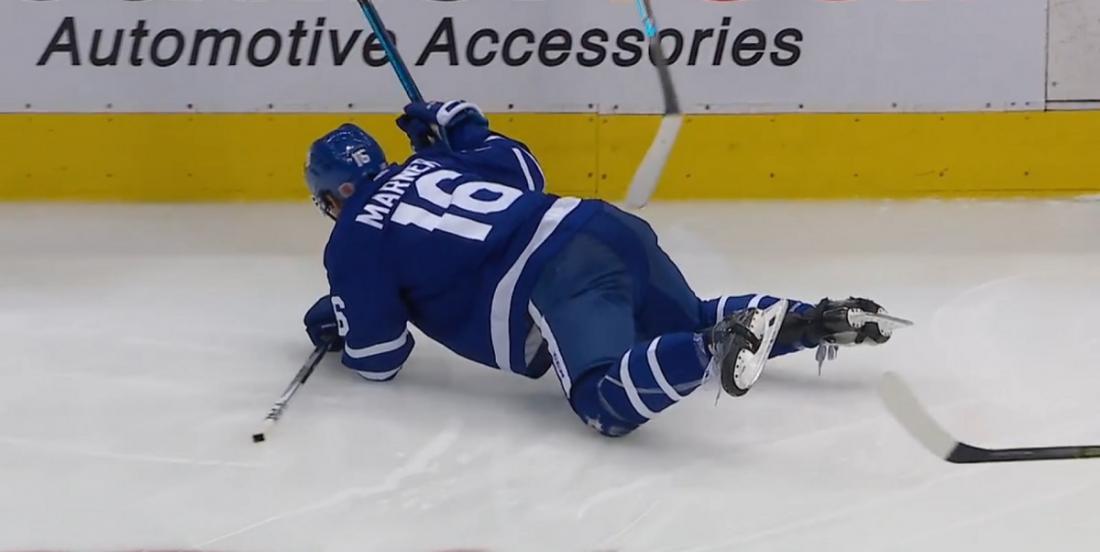 This could turn out to be very bad news for the Toronto Maple Leafs.

On Saturday night with the Maple Leafs facing off against the Philadelphia Flyers one of Toronto's star forwards appeared to suffer what initially looked like a rather significant injury. Maple Leafs forward Mitch Marner was immediately injured off the draw at the start of the second period when he stepped on a Flyers' stick and fell awkwardly down to the ice. I say the injury looked serious upon my initial viewing of the play because Marner appear to be able to put no weight on the leg that had stepped down on the stick.

Marner instead was forced to do his best to crawl towards the Maple Leafs bench and even then he was only able to make it all the way there thanks to some quick thinking on the part of his teammates on the bench. As Marner drew close to the bench several Maple Leafs players reached their sticks out as if tossing him a life preserver, and then dragged him to the bench once he had a firm hold on the stick. Marner did come back out and test his knee during the commercial break, but as of right now it seems as though he will not be coming back to the game this evening.

It is hard to say what exactly caused the injury, Marner's leg twisted awkwardly when he stepped on the stick, but perhaps even worse was the way it bent when he fell backwards. All of Marner's weight appeared to come down on his leg as it bent back in an ugly looking direction, and I hate to say it but this one does look rather bad. Perhaps a silver lining here for the fans in Toronto is the fact that the young forward appeared to be doing his best to fight through the pain, and only went back to the Maple Leafs locker room after being forced to do so. Even then Marner seemed unhappy about being sent to the back so perhaps that can be taken as a sign that the player himself does not feel this is too bad of an injury in spite of how it looked to us.

Update: Marner has in fact been ruled out by the Maple Leafs but it appears the injury is to his ankle and not his knee.