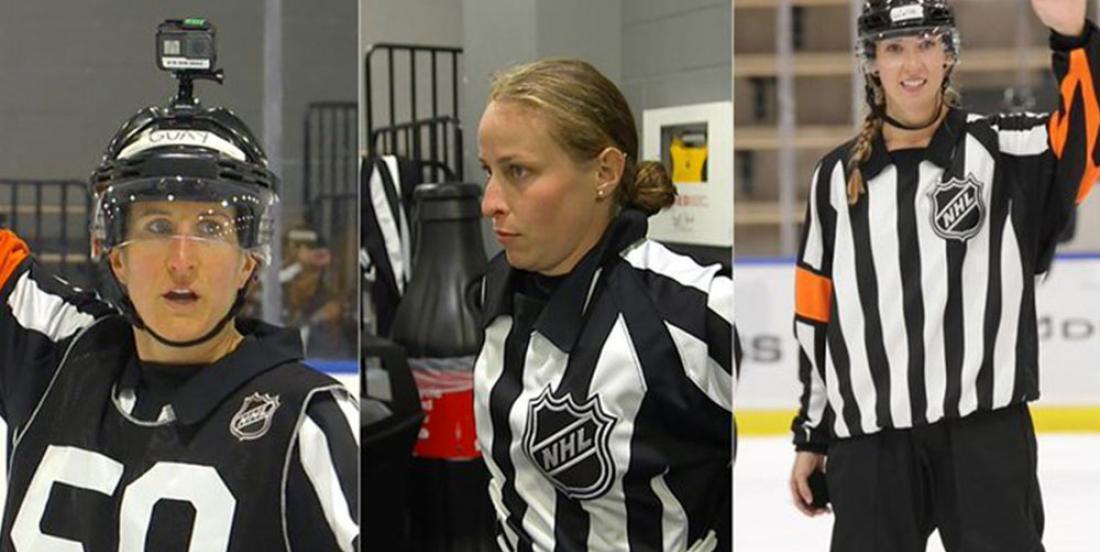 This just in, the NHL will feature female officials this season for the first time ever. Well… kinda…

While the league hasn’t yet committed to ANY officials for the 2019-20 season, it has announced that referees Katie Guay and Kelly Cooke and linesmen (lineswomen? Linesperson?) Kirsten Welsh and Kendall Hanley, have been selected to officiate in 2019 rookie tournaments.

All four women participated in the 2019 NHL Exposure Combine in Buffalo just two weeks ago.

“The opportunity to officiate at an NHL Rookie tournament is an important step in the development of the next generation of elite officials and we look forward to watching all four women elevate their performance in this new competitive environment,” NHL senior vice president and director of officiating Stephen Walkom said.

And make no mistake… there’s aren’t token hirings made by a virtue signalling league. These women are legit.

Check out these profiles of the four officials, courtesy of NHL.com:

Guay has officiated for 14 years, including at the 2018 PyeongChang Olympics. The 37-year-old officiates men’s and women’s NCAA Division I hockey, was part of the first all-female officiating crew at the 2019 Women’s Frozen Four and was the first woman to officiate the men’s Beanpot Championship in 2019. She played Division I hockey for Brown University from 2001-05 and has competed for USA Hockey’s National Under-22 Team.

Cooke is a licensed referee for the IIHF and NCAA (Division I) and has officiated for 10 years. She was also part of first all-female officiating crew at the 2019 NCAA Women’s Frozen Four. The 29-year-old played Division I hockey for Princeton from 2009-13. She was a four-year ECAC All-Academic Team selection, was selected as Princeton’s captain and named team MVP in 2012-13.

For Welsh, the Exposure Combine was her first introduction to officiating. She played Division I hockey for Robert Morris University from 2015-19 and was captain during her senior season. The 22-year-old was a two-time All-College Hockey America First-Team selection and CHA Defender of the Year in 2017-18. She helped Robert Morris win three regular-season CHA titles.

Hanley is entering her 12th season of officiating and is a licensed linesman with the IIHF, NCAA women’s hockey (Divisions I and III) and the National Women’s Hockey League. She is also entering her fourth season as a linesman in USA Hockey’s Officiating Development Program, where she has officiated in the USHL, NAHL and NA3HL junior hockey leagues. The 35-year-old played Division III varsity hockey for Elmira College from 2005-07 and SUNY Oswego from 2007-09 while completing her Bachelor of Science in zoology.