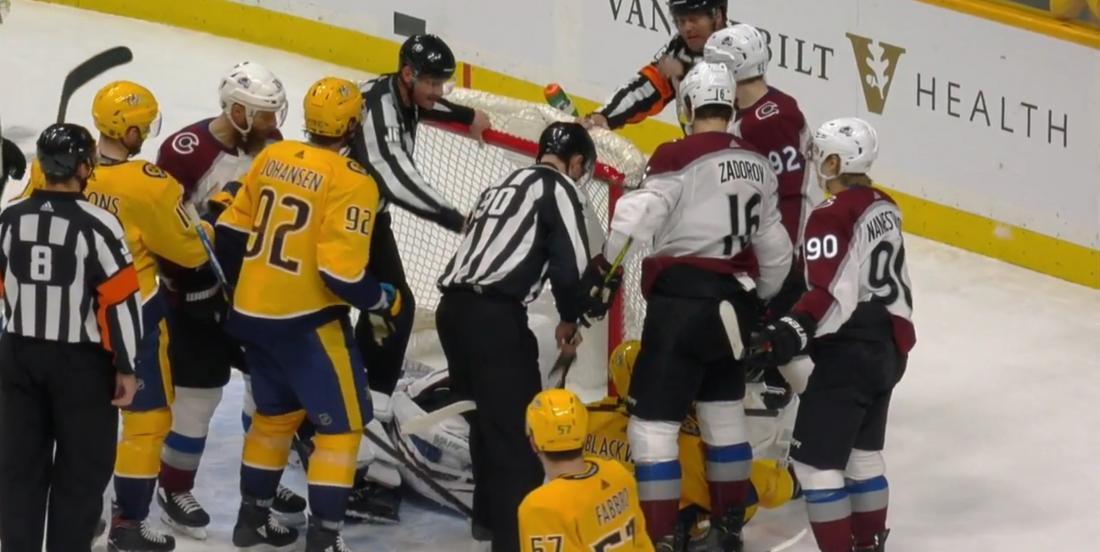 When the Nashville Predators and their fans saw the instant replay of this one on the big screen they were fuming, and you can hardly blame them given the circumstances.

The Predators, who are currently in the middle of an insanely tight playoff race with 3 teams within 2 points of them, were facing off against the Colorado Avalanche on Saturday night in an all important game as it pertains to their hopes for the playoffs. The Predators desperately needed to come away with some points in this one and although things were starting to look bleak with the Predators trailer the Avalanche just a few minutes left on the game clock in the 3rd period by a score of 2 - 1, the Predators managed to rally thanks to what looked like a game tying goal from Nashville Predators rookie defenseman Dante Fabbro. Unfortunately for the Predators however that goal would be waived off by what would turn out to be a National Hockey League official making a terrible call.

Now to be fair to the officials on the ice there was no question that Colorado Avalanche goaltender Pascal Francouz was run over in his own net on the play, and there's also no doubt that he had no chance to make a play on the puck due to the fact that Nashville Predators Colin Blackwell effectively fell right on top of him. It was for that reason that the goal had been waived off, and perhaps more importantly that a penalty had been awarded to Blackwell for goaltender interference, but the replay would tell a very different story.

Upon watching the replay Blackwell could be seen coming to a complete stop in front of the Avalanche net, and in front of Francouz, only to then be run over himself by Colorado Avalanche defenseman Nikita Zadorov. There was no question that it was the contact from Zadorov that sent Blackwell into Francouz, but because the play had initially been ruled a penalty by the officials the Predators were left unable to challenge the play, a massive turning point in the game.

Not only the Predators robbed of what should have been a goal, but they were also awarded a penalty on the play, a major momentum swing the other way that eventually led to them falling by a score of 3 - 2 to the Avalanche.