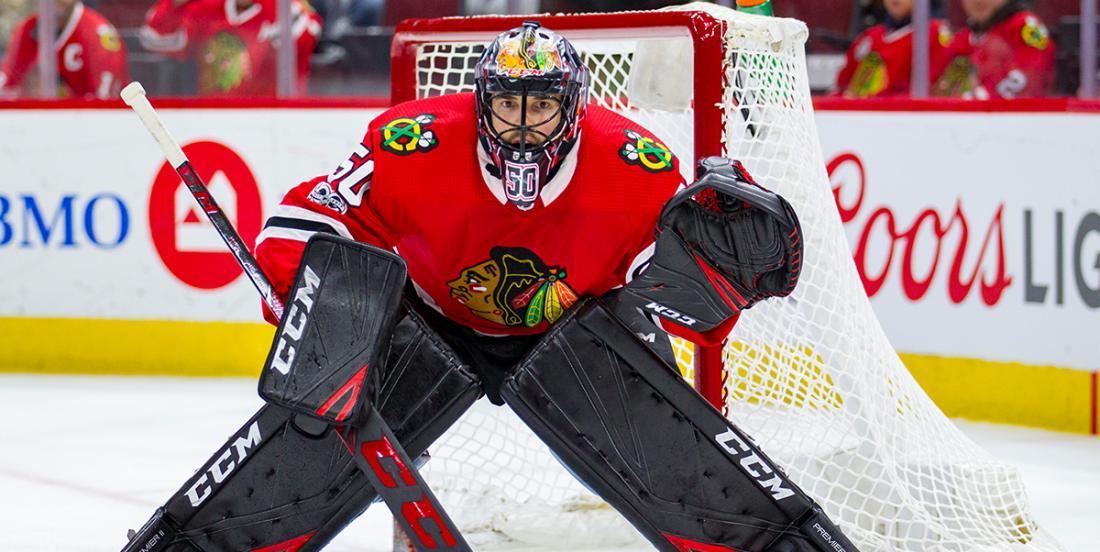 Chicago Blackhawks goaltender Corey Crawford hasn’t played an NHL game in nearly 10 months. In his absence the former powerhouse Blackhawks have struggled mightily. The team failed to qualify for the Stanley Cup Playoffs last season for the first time in a decade. The last time the team had missed the playoffs was during superstar Jonathan Toews and Patrick Kane’s rookie campaign way back in 2007-08.

The 33 year old Crawford has been dealing with severe post concussion symptoms for the past 10 months and, at one point, it appeared as though his career may be in jeopardy. Not knowing if and when they’d get their starting goaltender back, the Blackhawks went out and signed longtime Carolina Hurricanes goaltender Cam Ward this past offseason. Ward, as many analysts predicted, has gotten off to a rocky start in Chicago this season. The veteran sports a bloated 4.07 goals against average and a putrid .879 save percentage.

The good news? The Blackhawks are 3-0-2 and Crawford could make his long awaited return to the ice this Thursday when the team takes on the visiting Arizona Coyotes. Following practice earlier today Blackhawks head coach Joel Quenneville announced that Crawford is “expected to play” tomorrow night.

"It feels good to be back to myself," Crawford himself said after practice. "I'm feeling clear."

Officially, Crawford has not been named tomorrow’s starter just yet, but so long as he gets through tomorrow’s morning skate without any ill effects, he’ll get the start. He’s been cleared by the team’s medical staff and he’s got the nod from Quenneville, so ultimately the decision comes down to Crawford himself. Here’s hoping the veteran gets back between the pipes and never looks back.

It's worth noting that should Crawford return to action tomorrow, the team will need to activate him off the injured reserve. This means that 25 year old Swedish backup goaltender Anton Forsberg will likely find himself the odd man out. It's expected that he'll be placed on waivers and demoted to the AHL's Rockford IceHogs if indeed Crawford returns. Forsberg struggled when cast into the spotlight after Crawford's injury last season and has yet to play a game for the Blackhawks this season.