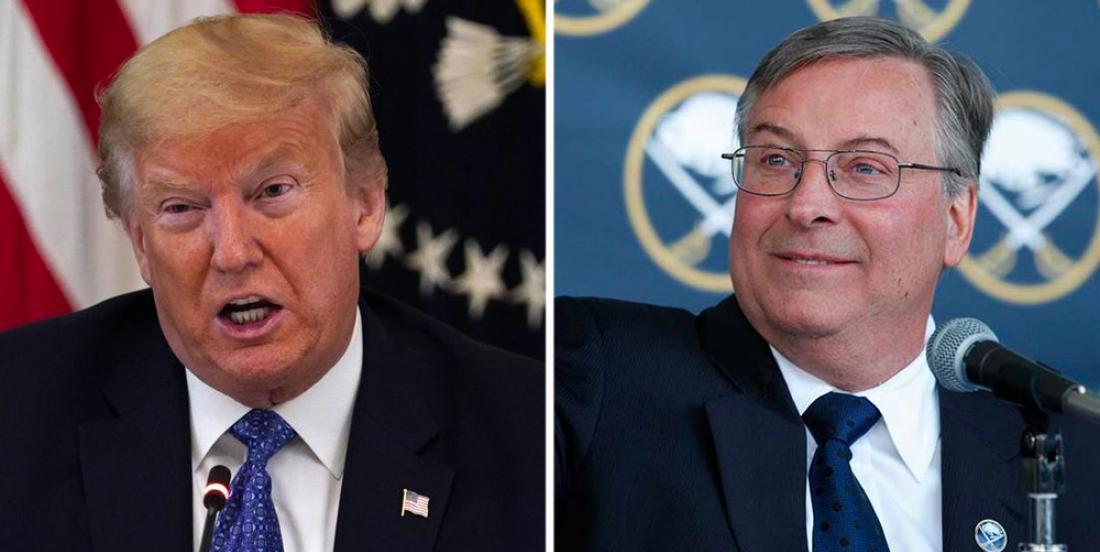 According to a report from Buffalo Sabres insider John Vogl, Sabres owners Terry and Kim Pegula are suing United Sates Citizen and Immigration Services after the governmental organization denied a claim for the team’s athletic trainer, a native of the United Kingdom.

Check out the details below courtesy of Vogl’s latest column for The Athletic:

U.S. Citizenship and Immigration Services has denied an immigrant alien worker petition for Edward Anthony Gannon, a native of the United Kingdom who was hired as the team’s strength and conditioning coach in 2015. On Tuesday, Gannon and the Sabres’ owners (formally known as Hockey Western New York, LLC) filed a suit in U.S. District Court against federal immigration officials for wrongly denying the application.

The lawsuit says the denial interferes with the owners’ ability to “successfully conduct its operations in the U.S. and potentially subject them to substantial financial harm and disruption in developing their athletes if Dr. Gannon needs to depart the U.S.”

Gannon, who was hired by the Pegulas back in 2015, has been working under temporary nonimmigrant status. Typically, employees working under such an arrangement are approved for a total stay of 10 years, but restrictions under U.S. president Donald Trump have changed that.

“Let me stress that we selected Ed after an exhaustive search across the world of professional sports performance,” Kim Pegula wrote on Gannon’s behalf. “We spanned the globe to find an elite Strength and Conditioning expert because this role is absolutely critical to our overall organizational success. It is a critical role that is fundamental to our organization’s success both on and off the ice.”

“We spend tens of millions of dollars each year on world class athletes. We require our Head of Strength and Conditioning to expertly monitor and train these athletes so they achieve success on the ice. It is a critical role that we entrust to someone who also has world-class credentials and who can properly take care of our valuable assets.”

The immigration department have declared that Gannon failed to meet their approval by being unable to show he has sustained national or international acclaim and failed to demonstrate that he has risen to the very top of his field.

Immigration officials state that evidence provided on Gannon’s behalf was given by only few people and featured “several solicited letters from ‘trainers’ at athletic organizations” and included solicited colleagues “who claim” they utilize Gannon’s research findings and strategies with their own work.

“An individual with sustained national or international acclaim should be able to produce unsolicited materials reflecting that acclaim,” the immigration department wrote in its denial. “For instance, you did not submit national or international media describing the beneficiary’s significant original contributions.”
Oil, click below:
The Pegulas’ lawsuit demands that the immigration department withraw their denial and aprove Gannon’s application.

For the full article from V