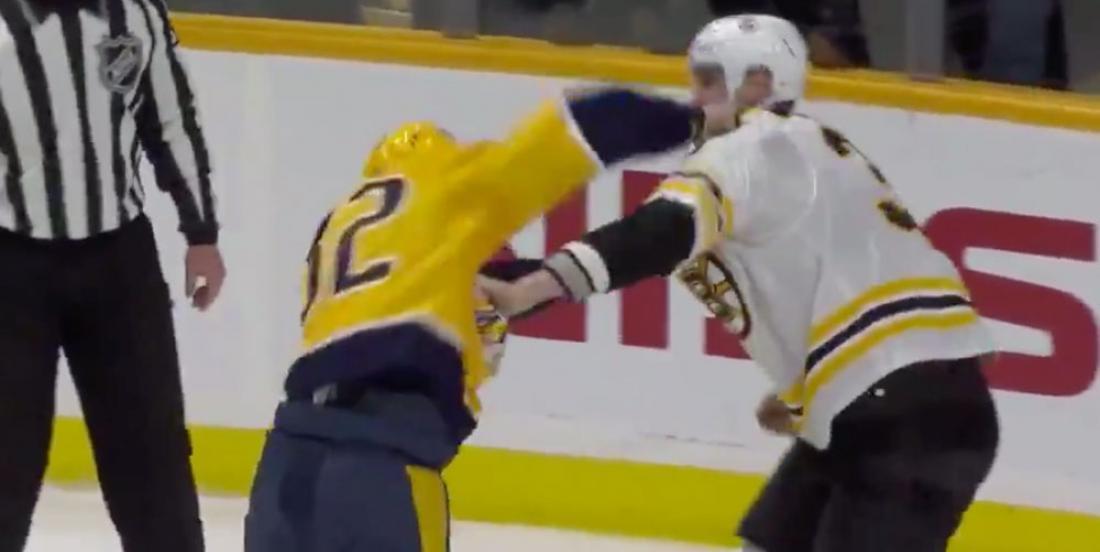 We didn’t expect this!

In his first season with the Nashville Predators, forward Yakov Trenin wants to make a great impression. He has managed to produced offensively, but made the greatest impression on Tuesday night when he found a giant on the ice.

During Tuesday’s third period of the game between the Boston Bruins and Predators, Trenin wanted to get noticed.

With the Bruins up 4-1, the 22-year-old rookie put a big hit on defenseman Charlie McAvoy behind the net. Captain Zdeno Chara clearly didn’t like the hit and proceeded to wrap up Trenin from behind before the two players dropped the gloves.

While Chara had the clear advantage and landed several shots, Trenin landed a huge right on the blue liner’s mouth, sending Chara down, one knee on the ice.

The fight ended there, but fans and teammates were more than impressed with Trenin’s performance.

You have to remember: Chara underwent jaw surgery less than two weeks ago. Tough guy.

Both players  were handed five minute majors for fighting, while Chara was given an additional two-minute penalty for roughing.

You gotta love Trenin’ courage to play hard and not stepping away from Chara’s anger.

Trenin has fought once before in the NHL, but the fight took place in the preseason. This one is official and against Chara: how can you beat that for a first career fight?!