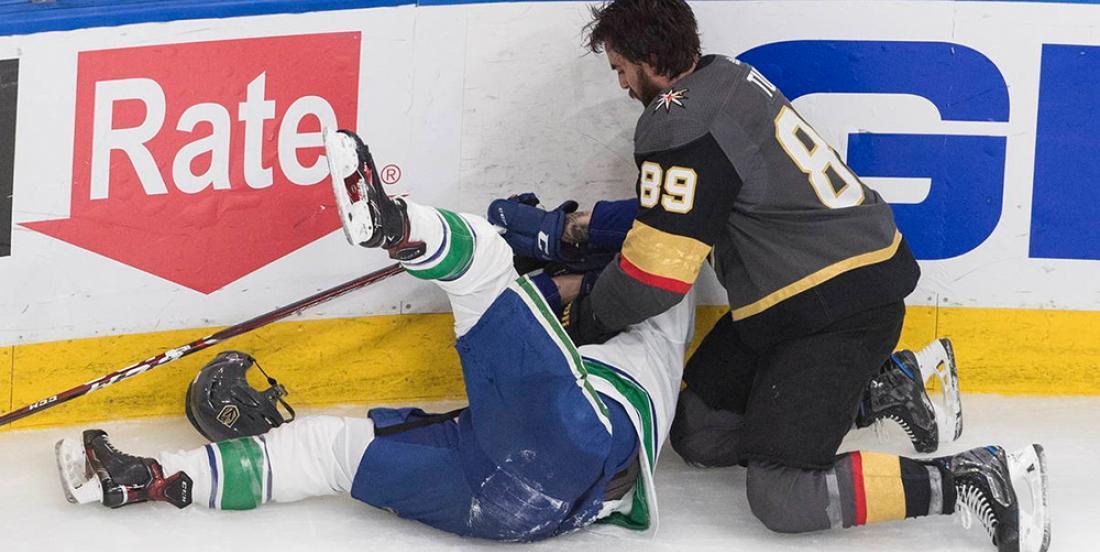 Vegas Golden Knights forward Alex Tuch was on the Spittin’ Chiclets podcast earlier today where he shared a hilarious story from within the NHL’s Edmonton bubble this past summer.

Just hours after absolutely mugging Vancouver Canucks forward Jake Virtanen, the two were forced to take an elevator ride together inside the NHL’s Edmonton bubble hotel.

First though, here’s the physical exchange the two players had in Game 2 of the team’s second round playoff series:

So you can imagine just how awkward it was when the two crossed paths within the tight confines of a hotel elevator just two days later.

“I jumped on top of Virtanen during one of the games… and then I rode in the elevator two days later.”

“We just looked at each other… I go, ‘Jake…’ and he goes ‘Tuch’… and then we both laughed and kept on going. That’s what happens. Our little scrum on the ice probably goes back to World Juniors when we were 18 or 19 years old we’ve always kind of gone at it a little bit I’d say. But that’s just how it is between US and Canada boys.”

Priceless! To be honest, I'd love to hear more stories like this. Tuch wouldn't divulge any more stories, but he did say that if Canucks forward Antoine Roussel happened to find himself in an elevator with Vegas goalie Robin Lehner that things could get ugly.

“I think that if Antoine Roussel ever rode in an elevator with Robin Lehner, that’d be a little dangerous.”

“Roussel just chirps and chirps… I won’t even tell you some of the stuff he said.”

Rous may have more experience on his fighting card, but I'm taking Lehner all day every day if these two drop the gloves in an elevator!