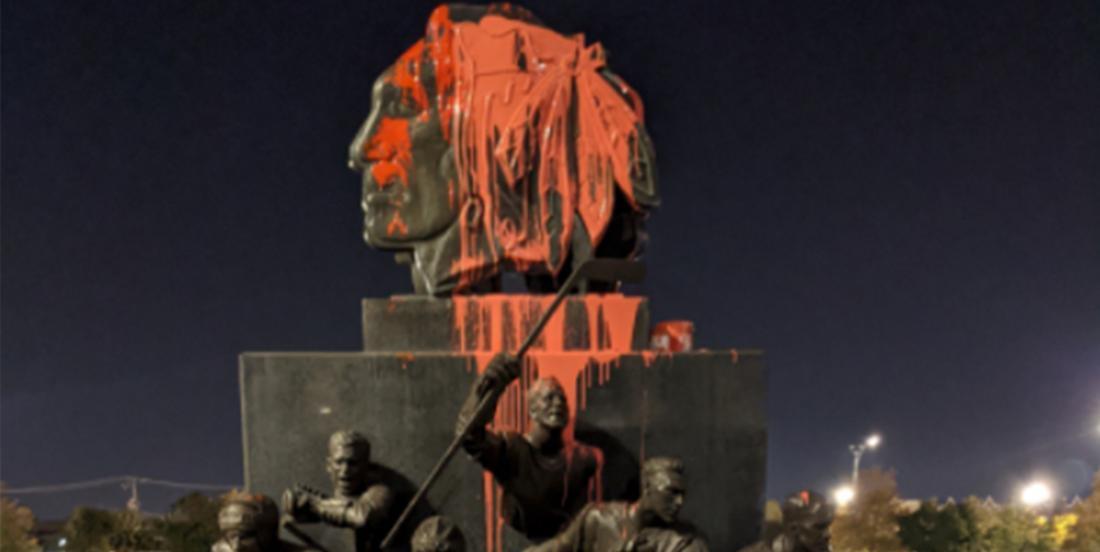 The public debate over the Chicago Blackhawks' logo isn't going away anytime soon.

Despite the fact the Blackhawks' logo depicts an important person in Illinois' history, Chief Black Hawk of the Sauk tribe, there are individuals who feel it's racist and that the team should be forced to change their name and logo. I'll be the first to say that those people are simply ignorant and they need to do their research into what the team name/logo means and what it represents. I mean... at the very least these people could read a Wikipedia article to at least inform themselves about what they seem so outraged about.

In any case, suffice it to say that there are ignorant people out there who feel the Blackhawks' name and logo should be changed. And then there are people who resort this sort of garbage.

Yep... that's the Blackhawks' logo statue outside the United Center and it's absolute covered in red paint and graffitied messages. Personally, I won't do these idiots the honour of even reading their message. In my eyes this is wanton destruction for no other good reason than to give a middle finger to the Blackhawks because... why? Because you don't like their logo? Grow up. I think most hockey logos are dumb, but you don't see me headed anywhere with a bucket of red paint!

“Over the weekend, the sculpture on Madison Street outside of the United Center was vandalized,” a spokesperson for the United Center wrote in an email to The Athletic yesterday. “It is currently under tarp for protection and will be sent off to be repaired in the near future.”

For what it's worth, the Blackhawks organization led by Rocky Wirtz has addressed criticisms of the name and logo throughout the years and has attempted to educate people who see it as a mockery akin to the Cleveland Indians or Washington Redskins.

“I think we truly believe that it’s a logo of honor,” Wirtz said in the past. “We also have heard from some of our partners and some newer voices in the Native American community who are holding us responsible or accountable for the types of education that come from having this platform. And so to us, that’s our frame of reference. And we know the logo also means a lot to our fans. I’d be naive to say that’s not important. But I think we want to do that with respect, and we want to do that with understanding how to represent this logo and represent the Blackhawk brand in a way and identity in a way that’s appropriate, respectful and that is actually using the platform for good and for education.”