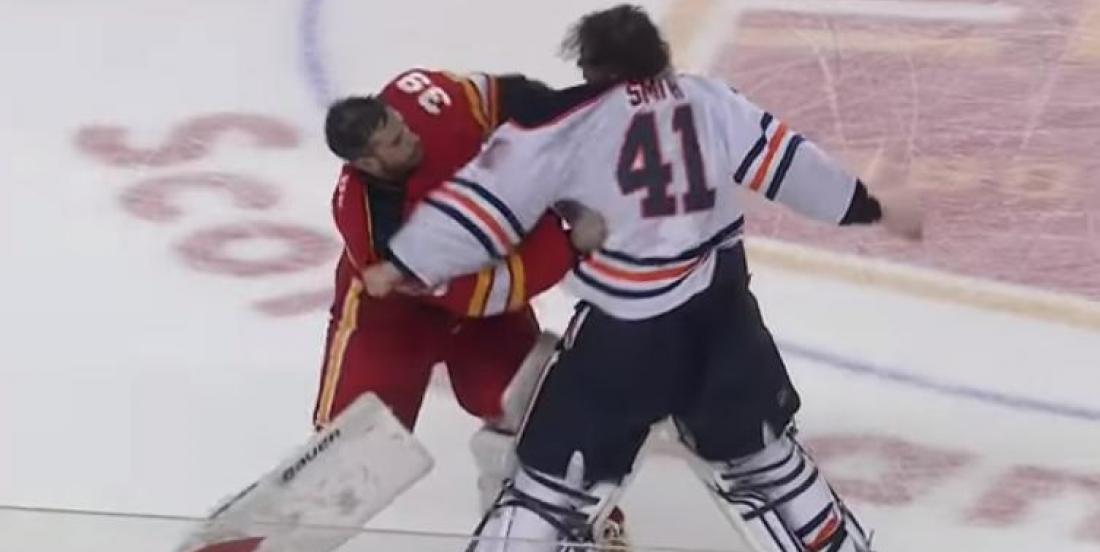 Goalie fights in the NHL are pretty rare nowadays, so when one happens it's a big deal. Images of Calgary's Cam Talbot and Edmonton's Mike Smith were plastered all over the internet after the latest installment of the Battle of Alberta, as the two sqaured off at centre ice for an old-fashioned goaltender showdown. It didn't last long and it certainly appeared that Smith had the upper-hand. Talbot says that doesn't surprise him in the least.

"He's a big boy, so I knew it wasn't going to work out well for me," Talbot told reporters today while smiling. "At the same time, it just felt like one of those things that was the right thing to do in the moment."

Talbot isn't wrong in his assessment. Smith is six-foot-five, 220 pounds. Definitely not a small guy. But, Talbot seemed to take the whole thing in stride, laughing as he talked about the moment.

"I know how big and strong he is so I knew it wasn't going to work out for me," he joked.

Talbot did say he got a couple of messages from his former Oiler teammates telling him they respected him for meeting Smith's challenge at centre ice. Talbot says he respects Smith for doing the same.

Talbot's wife, Kelly, was not as jovial about the whole situation. She took to Twitter after the game, stating "Cam fought and if he didn’t people would chirp him for being scared. I don’t care of outcome he fought for his team! We can’t win them all with this game!" She also referred to Oilers fans as trolls.