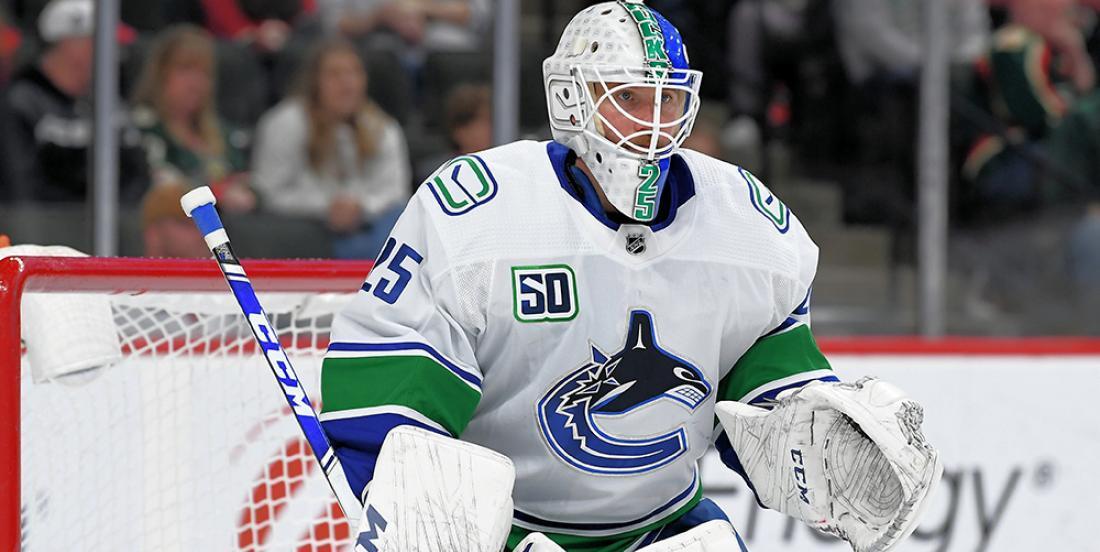 In case you missed it in all the hoopla of Monday's NHL trade deadline action, the Vancouver Canucks picked up goaltender Louis Domingue from the New Jersey Devils. Why? Jacob Markstrom and Thatcher Demko have been a terrific tandem, with Markstrom putting up Vezina Trophy nominee performances on the regular. Well... Marky's hurt.

So he'll be "re-evaluated" in two weeks? This means he could be out longer?

While it's not perfect news, it's certainly better than season ending surgery. Keep your fingers crossed for a quick recovery, Canucks fans.

Complicating matters a bit more is the fact that Markstrom is a pending unrestricted free agent. The Canucks have an important decision to make on  Markstrom's future with the team. Markstrom has been the Canucks’ MVP this season and is the biggest reason why the team is in pushing for their first playoff spot since 2014.

Markstrom is turning 30 years old and is likely seeking some term and security on his upcoming contract. He’s coming off a three year deal worth $3.6 million per season. He’s due for a sizeable raise both in dollars and term and that has to be scary for GM Jim Benning. Under Benning, the Canucks have become one of the youngest and most exciting teams in the NHL. Elias Pettersson, Brock Boeser, Quinn Hughes, Bo Horvat… the team’s young core is starting to emerge and fans are hoping that 24 year old goaltender Thatcher Demko is part of that core moving forward. So… what do you do with Markstrom? Demko needs game-time and some runway to develop and Markstrom, deservedly so, is blocking the way.

So… what’s the plan?

“We’ve started the process of moving things around,” Canucks assistant John Weisbrod said. “There have been some sort of good place-setting conversations to sort of get a handle on what we’re looking at and what’s the best interest to him and what’s the best interest to the team, and obviously I’m hopeful that somewhere down the stretch here we’ll be able to find some middle ground and get it worked out.”

In other words, “We’re not letting this guy get away for nothing.”

“We know that we want him back, we know that he wants to be here,” Weisbrod said. “We don’t want it to get too in-depth during the season because we want his head focused on the games and what we need to do as a team and being able to focus on things on the ice down the stretch.”

Weisbrod didn’t make mention of Demko in his comments, but it’s clear that the group is wary of creating another Luongo/Schneider situation with Markstrom/Demko.

“He’s obviously been a very important part of our group,” Weisbrod said. “Whether it works itself out while we’re still playing or whether it becomes a summertime issue, I don’t think that’s of great concern. … Obviously, once you start conversations it’s going to move at the pace that it moves. We do have what we consider a long runway in terms of time to get it done.”