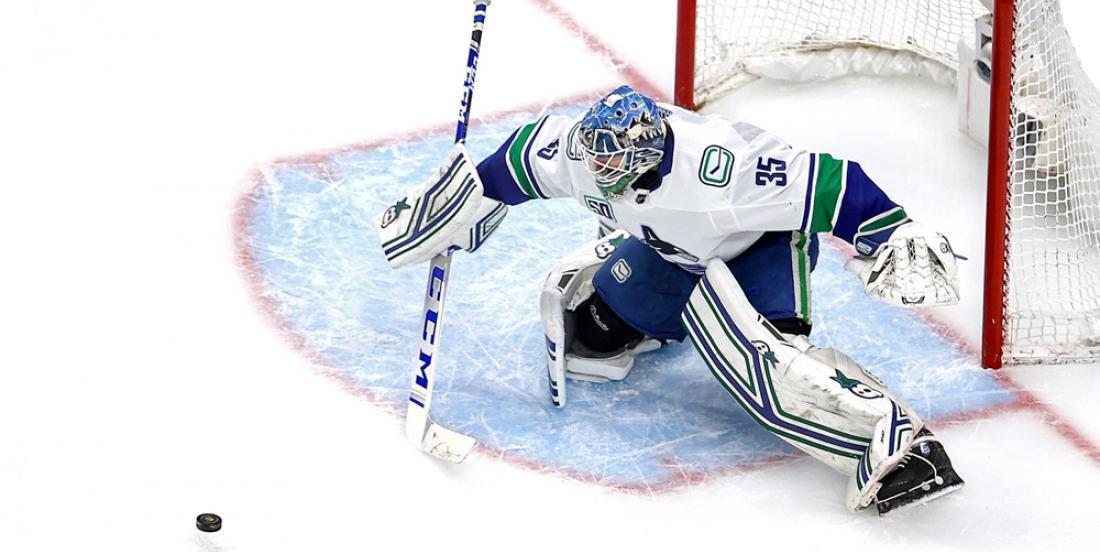 The kid is legit. Demko or Markstrom moving forward?

In case you missed it last night, the Vancouver Canucks were forced to turn to backup goaltender Thatcher Demko in Game 5 against the Vegas Golden Knights after it was determined that starting goaltender Jacob Markstrom was "unfit to play" due to a lower body injury. Aside from a one period stint in relief of Markstrom last round against the St. Louis Blues, Demko hadn't played an NHL game in over five months. So what does he do? Earns 1st star status with an incredible 42 save performance to earn his first career NHL playoff win.

With their backs against the wall, facing elimination against the top team in the NHL's Western Conference, the Canucks were forced to turn to their backup goalie and boy, oh boy did he deliver. In fact, with Demko's win last night he became the first Californian born goaltender to win a Stanley Cup Playoffs game and is the first goaltender since 1997 to earn his first career playoff win while facing elimination.

While Canucks fans may scoff at the Jose Theodore comparison, the fact of the matter is that Theodore was a good goaltender for a very long time in the NHL. He hit the highest of highs early in his career, becoming just the sixth goaltender in NHL history to win the Hart Trophy as the league's MVP. If Demko ever finds himself in Hart Trophy conversations, I think that Canucks fans will be very, very happy.

In any case, here's hoping that Demko's performance last night was not a flash in the pan, one-time performance because the Canucks may need him between the pipes tomorrow night for Game 6 if in fact Markstrom is still out of the lineup. And even if Markstrom is deemed fit to play, should the Canucks run with Demko anyways? Markstrom has been great no doubt, but Demko just pulled these team back from the brink and at just 24 years old, he's the team's goalie of the future. The 30 year old Markstrom is a pending unrestricted free agent whose future with the team is very much up in the air.

What's your call? Demko or Markstrom?