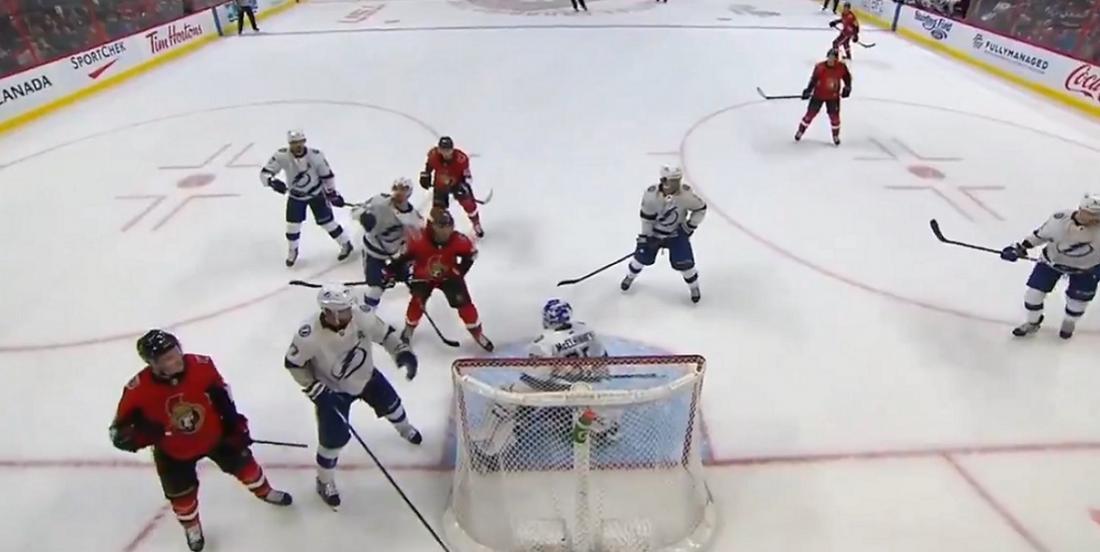 This one was pretty awesome, even if it will never show up on the scoresheet.

On Saturday night the Ottawa Senators and the Tampa Bay Lightning faced off and during the course of the game Ottawa Senators forward Colin White scored one of the more creative goals you're ever going to see in the National Hockey League. Creative in the sense that it is an illegal play and no one uses it for this reason, but nonetheless it was fun to watch in real time and it was even more fun to await the NHL's ruling on the matter even though we all knew what the outcome would be.

During an offensive output from the Ottawa Senators in the Tampa Bay Lightning's zone a deflected puck found itself way up in the air and effectively put the game on hold for a few short moments. All the players stood around as they looked up at the puck, every one of them either expecting the play to be blown dead or simply waiting for the puck to come back down before resuming play. White however had other ideas and as he saw that puck tumbling back down towards both he and the ice he suddenly was overcome with a brilliant idea. Perhaps White has been watching one too many soccer games as of late because as the puck came back down White leapt forward and drove his head into it. The move in soccer is known as a header and in that sport it is perfectly legal, but unfortunately for White in the game of hockey you can not use your head to propel the puck into the net.

The Senators celebrated like they had scored however and no doubt a part of that was as a direct result of just how hilarious they all found their current predicament to be. The Senators of course had to have known that the goal would not count, however White would state after the game that he was unaware of the rule and was genuinely making an attempt to score here.

What do you think guys? Should we call this one the "disallowed goal of the year" as the Canucks Brady Trettenero suggests?