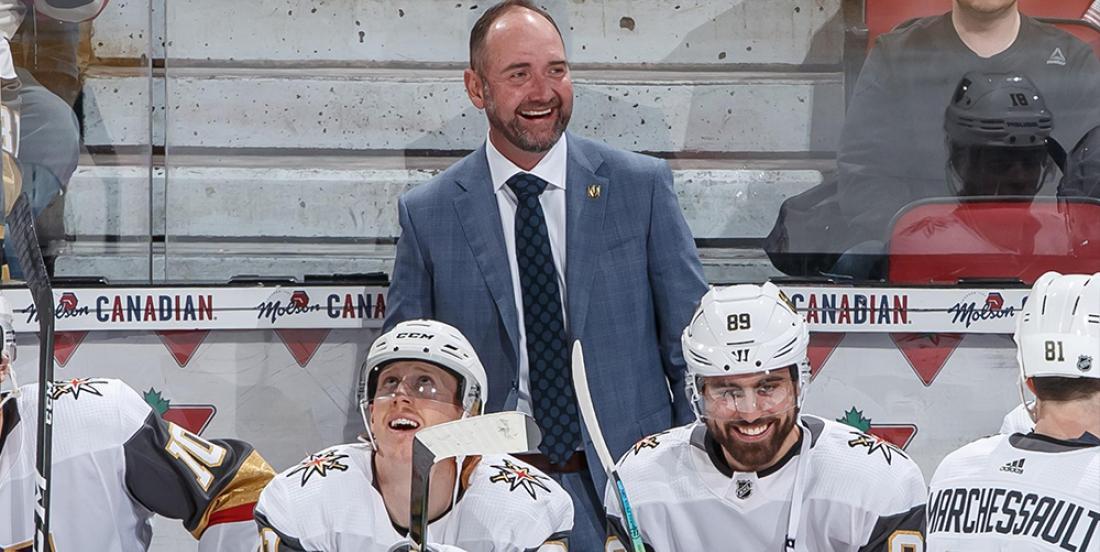 It was a move that NO ONE saw coming. With his Vegas Golden Knights firmly in a playoff spot and with a franchise regular season record of 118-75-20 in 213 games, head coach Gerard Gallant was unceremoniously dumped.

To his credit, DeBoer has fit in well and has done a good job with the Golden Knights since taking over.

“I got the Vegas job … and had to address a group of men who hated my guts for the last three years,” DeBoer said to NHL.com earlier this week.

DeBoer went 4-3-2 in his first nine games with Vegas before rattling off eight wins in a row during the month of February.
.
“I think you coach in this league for opportunities like this, with teams like this,” he said. “I’m really thankful for how everything played out this year as tough as some of the moments were.”

“I’m a big believer that everything that happens in hockey happens for a reason,” DeBoer said. “One door closing, the way my career has gone, another door opens with a better opportunity. For me, as tough as it was to leave San Jose 33 games after going to the [Western Conference Final] the year before, the Vegas situation is an opportunity of a lifetime.”

Now DeBoer is keeping true to the Vegas/San Jose rivalry by throwing some subtle shade at his former team.

“It’s the most talented team I’ve had in my coaching career,” DeBoer said on The Chirp with Darren Millard podcast. “It seems like a great combination of talent and character and leadership.”

Wow… so after less than a quarter of a season you’ve determined this is the most talented team you’ve coached? Interesting.

But, what is DeBoer going to say? That the Sharks were better? This is clearly a head coach trying to inspire his group and, frankly, he might be right. While DeBoer had superstar players like Brent Burns, Joe Thornton and Joe Pavelski under him in San Jose, I’m not sure those Sharks teams can stack up against Vegas’ depth. Stone, Pacioretty, Smith, Marchessault, W. Karlsson, Stastny, Tuch, Glass… the Golden Knights just have so many weapons and come at you in waves.

While the Sharks aren’t anywhere close to a playoff spot this season, here’s hoping they turn things around in 2020-21 as this rivalry has all the makings of an all-time classic. Again, here’s hoping the Sharks find a way back into contention so we get more Sharks vs Golden Knights fireworks.