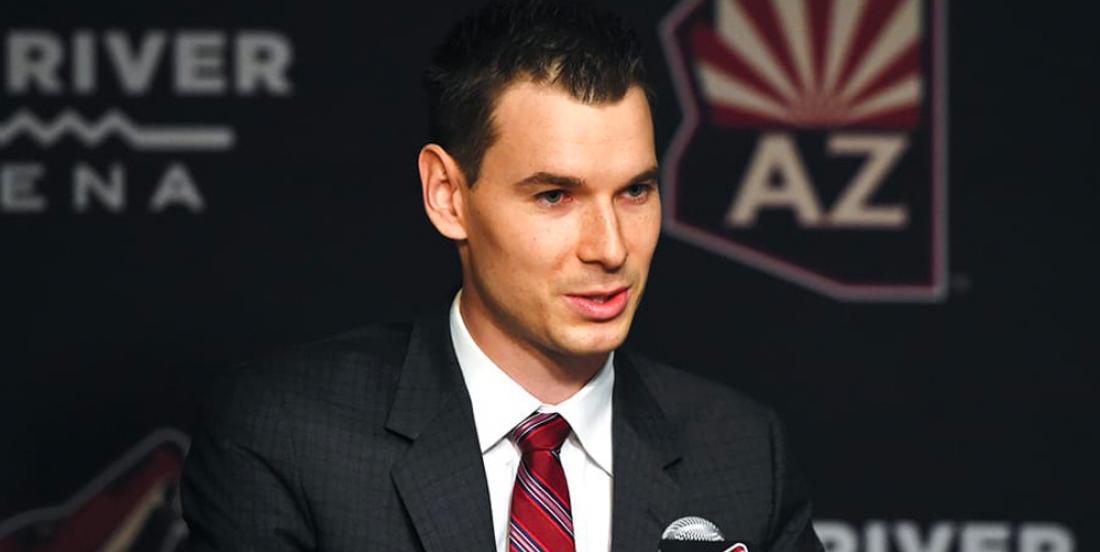 The Arizona Coyotes shocked the hockey world this past weekend when they issued a press release stating that GM John Chayka had “quit” on his team, his staff and his fans.

“The Club is disappointed in his actions and his timing, as the Coyotes prepare to enter the NHL’s hub city of Edmonton, where the team will begin postseason play for the first time since 2012. Chayka has chosen to quit on a strong and competitive team, a dedicated staff, and the Arizona Coyotes fans, the greatest fans in the NHL,” said the Coyotes in the overtly snarky statement.

Chayka confirmed his dismissal in a statement released to Coyotes insider Craig Morgan.

“The past four years have been the most enjoyable of my life. In Arizona, I became a husband and a father, while working as hard as possible to make the Coyotes a Stanley Cup contender. I love our players, coaches, staff and fans and I very much wish I could be with the team in Edmonton. Sadly, the situation created by ownership made that an impossibility. That’s all I intend to say on this matter for now. A fuller, more detailed explanation may be necessary in the near future. Until then, I wish the Coyotes good luck in Edmonton, and thank every member of Our Pack for the support shown to Kathryn, our daughter and myself over the years. Also, I want to congratulate Steve Sullivan as he steps into a new role. We’ve worked side-by-side for years. He is a great person and a terrific hockey mind.”

Fans were left to figure out what the Hell just happened. There was speculation that Chayka had received an offer elsewhere or that he and new Coyotes owner Alex Meruelo didn’t see eye to eye. But now, ESPN’s Grey Wyshynski is reporting on what really happened behind the scenes of this messy divorce.

Check out some of these quotes from Whysynski's latest column for ESPN:

About a month ago, an NHL owner called Meruelo asking for permission to speak with Chayka. Meruelo denied the request.

According to a source, Chayka came to Meruelo seeking permission to speak with the owner under the premise that it wasn't a job interview; making the argument that previous Coyotes owners would have let him have the conversation, as it was intended to "build relationships with owners in hockey" and "get market knowledge."

Spoiler warning: It ended up being a job interview.

After it appeared things remained status quo for Chayka and the Coyotes, he told Meruelo that he wanted to leave for an opportunity with that team: a job that would be a step up from NHL GM, into a role overseeing aspects of other sports teams in the owner's portfolio.

According to an NHL source, that team was the New Jersey Devils...

After Chayka requested his release to leave for the new job, sources said Meruelo "felt lied to" and "betrayed" after the previous conversation, the contract extension and the financial commitment to Chayka's plan for the Coyotes, which included a December 2019 blockbuster trade for Devils winger Taylor Hall.

After denying Chayka's release, the relationship between the GM and ownership became strained and acrimonious. The team offered to revisit the situation with Chayka after the conclusion of the season, according to sources. Chayka reportedly didn't trust that delay, and felt that denying him an earlier exit was "unreasonable." The team would reply that he was under contract.

"This is where things fell apart. The Coyotes felt it was a pattern of misrepresentation," a source said. "He tried to finesse it. There are some people that just think they're the smartest people in the room, and every now and then it comes back to bite them."

I have to say... if this is all found out to be true then then yes, Chayka absolutely did quit on his team and the Coyotes ownership and management group has every reason to be upset with him. The fact is that this guy had a contract in place and, for better or worse, was the captain of this ship. Literally just weeks after signing a new contract with the team though and he's looking to jump ship elsewhere?! No, sorry bud... that's not how sports management works.

Again if this is indeed all found out to be true, it's difficult to imagine Chayka ever getting a job in the NHL again.