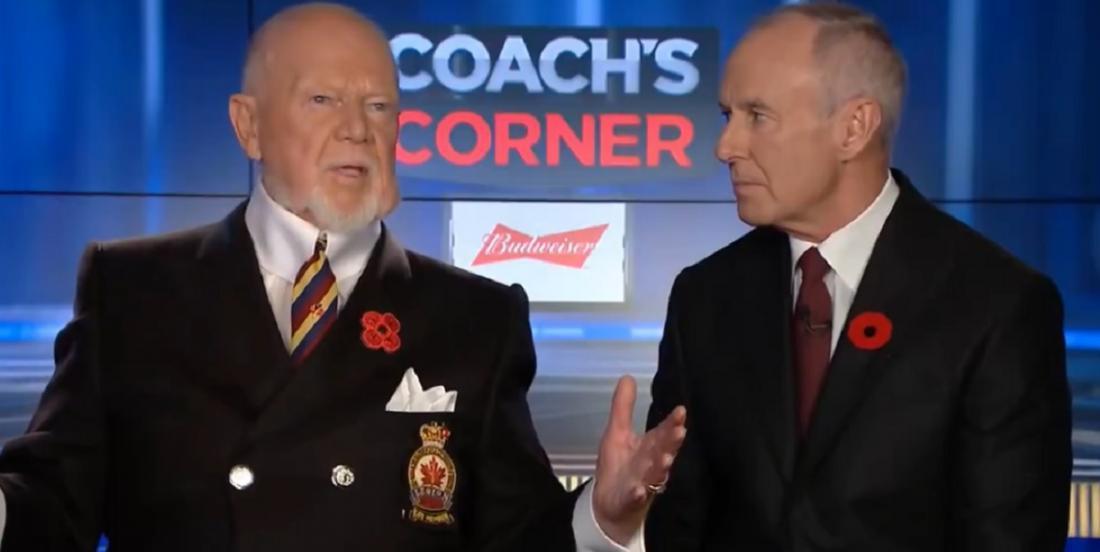 Cherry under fire over controversial comments.

The National Hockey League's most infamous analyst has rustled some feathers once again and this time around he has caused quite a bit of debate on social media as a result of some comments that have turned out to be rather controversial.

On Saturday night during his regular segment of Coach's Corner veteran NHL analyst Don Cherry took to the airwaves to air his annual remembrance day tribute, honoring all of the brave young men who gave their lives to protect the freedoms that all of us who live in the West enjoy to this day. Cherry, clearly a strong supporter of the armed forces on both sides of the border, has always been very vocal about his support for Remembrance Day but this time around his comments have landed him in some hot water.

The controversy stems from criticisms that Cherry issued during the segment towards people who fail to purchase a poppy on Remembrance Day, an act that not only shows support for the Canadian Armed Forces but one that actually contributes funds to the Royal Canadian Legion, a non-profit organization that provides services to former members of the armed forces as well as former members of the Royal Canadian Mounted Police. Cherry was very critical of all those who fail to show support for the Canadian Armed Forces on the national holiday, focusing specifically on the people he has personally encountered in his hometown of Mississauga, Ontario as well as in Toronto, Ontario. The controversy however stems from the fact that he appeared to focus at least some of his ire on Canadian immigrants.

Some have now accused Cherry of being racist or xenophobic due to the fact that he clearly seemed to be referencing the fact that he feels many of those who immigrant to Canada do not respect the tradition surrounding Remembrance Day. Here are just a few examples of the negative reactions to Cherry's rant on Saturday:

To be fair to Cherry however there are others who feel that his comments were directed at all Canadians who fail to honor the fallen on this sacred holiday, and many have spoken out to show their support of the NHL's most infamous curmudgeon following his Remembrance Day rant:

No doubt this will continue to be a controversial issue over the next few days and no doubt Cherry will continue to receive both plenty of flak as well as plenty of support for the comments he made over the weekend. If you'd like to hear the man in his own words and decide how you feel about this issue for yourself you can check out the segment that caused all this controversy in the short video clip provided below.