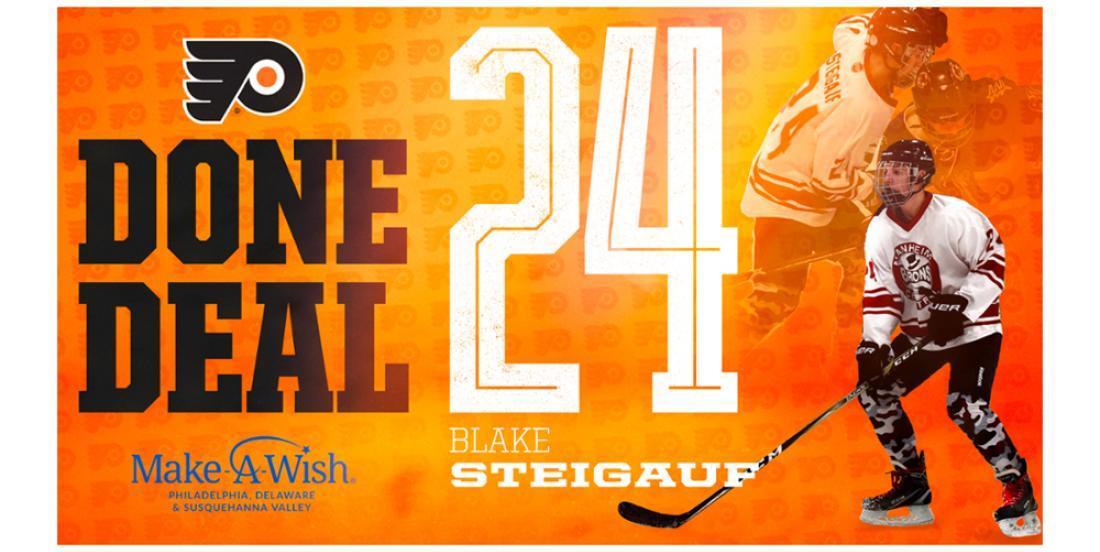 An incredible story. Kudos to the Flyers organization.

This just in, the Philadelphia Flyers have announced a CRUCIAL signing just in time for tomorrow night’s divisional game against the New York Rangers. Joining the team is 15 year old Blake Steigauf who signs a one day contract with the team in partnership with the Make-a-Wish Foundation.

Blake, who was diagnosed with cancer on April 24, 2019, hails from Litiz, Pa. and currently plays for the Manheim Central High School hockey team. He’ll get a chance to join the team in the dressing room then take to the ice with them for warmup and the national anthem.

The Philadelphia Flyers announced today plans to grant the ultimate Flyers wish to 15-year-old cancer patient, Blake Steigauf. In partnership with Make-A-Wish® Philadelphia, Delaware & Susquehanna Valley, the organization will roll out the orange carpet for an unforgettable Flyers experience including Blake meeting his favorite player, Claude Giroux, signing a one-day contract, and suiting up for a professional game night.

Blake, who was diagnosed with cancer on April 24, 2019, hails from Litiz, Pa. and currently plays for the Manheim Central High School hockey team. A longtime Flyers fan, he wished for the full Flyers experience: attend a practice and a game, visit the team's locker room, eat lunch with the team, meet Claude Giroux and Gritty, and get some practice time in on the ice with some of the players. Blake will not only get to meet Giroux and the rest of the team, including Gritty, but will be surprised with two full days of professional player-level treatment at a practice and Wells Fargo Center home game.

After watching team practice on Thursday, February 27, Blake suited up in his own dedicated practice stall, complete with name plate and jersey, inside the team locker room and took to the ice at Virtua Center Skate Zone at Voorhees for a skills practice alongside Giroux and other members of the team.

Following practice, Flyers General Manager, Chuck Fletcher, presented Blake with a one-day contract to join the roster for the February 28 game against the New York Rangers.

Blake's game-day experience will mirror that of his new official teammates, arriving at the arena through the private player's entrance, dressing in an official locker room stall, and lining up alongside the team in the player tunnel. Sure to be a once-in-a-lifetime moment, Blake will lead the team out of the tunnel onto the ice and take an official solo "rookie lap" around Wells Fargo Center ice before watching warmups from the team bench.

As his final game-night duty, Head Coach Alain Vigneault has requested that Blake present the night's starting lineup before he returns to the ice and stands side-by-side with the starters on the blue line during the singing of the National Anthem.