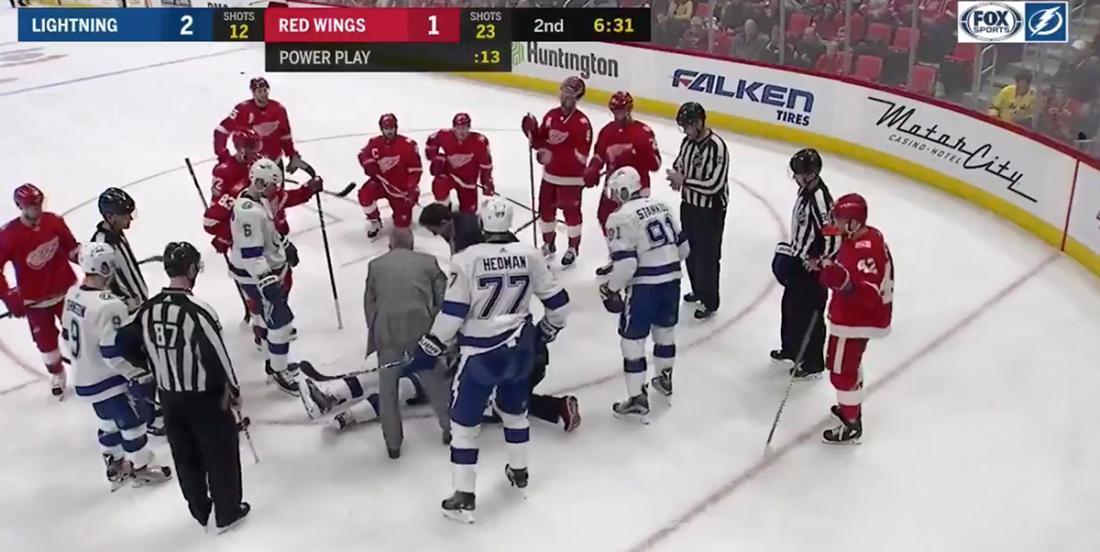 Scary moment tonight in Detroit as Tampa Bay Lightning defenseman Dan Girardi blocked a one-timer slap shot  in the side of the head from Detroit Red Wings forward Martin Frk.

Oh… oh no. That’s not good. Incredibly, Girardi was able to skate off the ice himself, with the help of his teammates and training staff. What’s remarkable though is that he didn’t require a stretcher to get off the ice safely. Girardi is either tough as nails, lucky as Hell… or both.

Ironically, it was Girardi who opened the scoring for the Bolts earlier in the game, potting his second goal of the season and assisting on a later goal by Lightning forward Tyler Johnson.

Check out this deft redirection from the veteran blue liner:

The Lightning have not issued an update on Girardi’s condition, but he was seen walking on his own shortly after being helped off the ice.

The 33-year-old Girardi has had a renaissance season with the Lightning this year after being bought out of his contract by the New York Rangers this past offseason. While no one will ever mistake him for teammate Victor Hedman, Girardi has been quietly effective on the Bolts blue line putting up two goals and nine points in 41 games. He’s a +16 in plus/minus and he plays some big minutes for a strong Tampa team LOADED with talent.

Here’s hoping that he’s healthy and suffered no damage as a result of this scary incident.

UPDATE: The team has reported that Girardi will not return to the game, but will be okay.