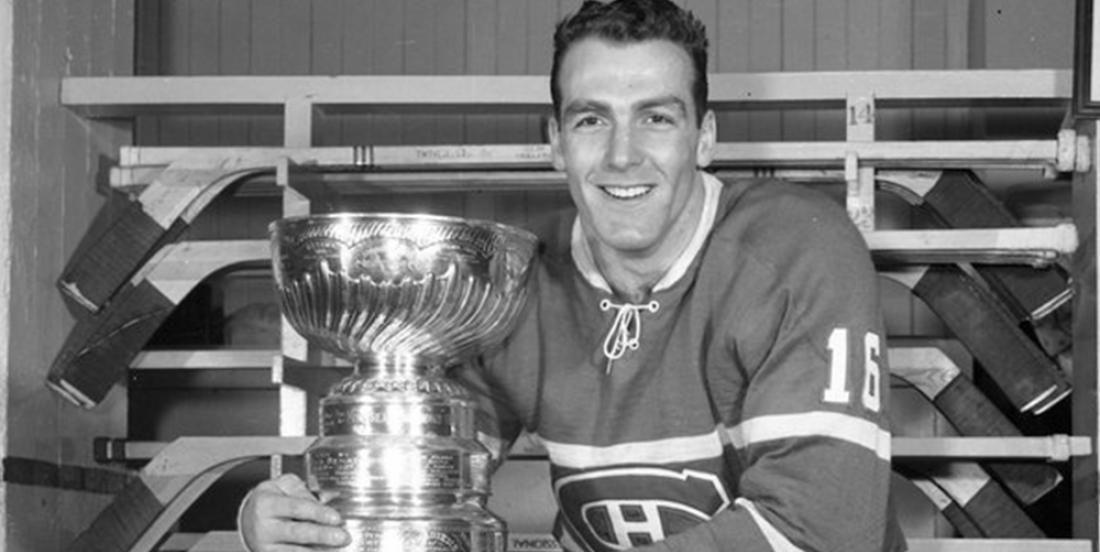 Richard, the younger brother of Maurice "Rocket" Richard, won an NHL record 11(!!!) Stanley Cups over the course of his 20 year career. Fifteen years younger and three inches shorter than his brother, Richard was nicknamed The Pocket Rocket and was named of of the NHL's 100's Greatest Player in history in 2017.

Read below for the official press release announcement of today's sad news courtesy of the Habs' website:

MONTREAL - The Montreal Canadiens were deeply saddened to learn of the passing of former captain and Hall of Famer, Henri Richard, earlier today in Laval at age 84.

Born in 1936 in Montreal, Henri spent his entire 20-year NHL career with the Canadiens. He was the only player, along with teammate Jean Béliveau, to accomplish this feat. Prior to making the jump to the NHL and joining brother, Maurice, with the CH, Henri starred with the Montreal National, recording 55 points in 49 games in 1951-52. He moved on to the Montreal Junior Canadiens where he would wear number 9, winning the scoring championship two seasons in a row.

Henri made his NHL debut with the Canadiens in 1955-56, recording 19 goals and 40 points in his rookie season and winning his first Stanley Cup. His first five seasons with the club concluded with a Stanley Cup championship. Henri is one of 12 players on the Canadiens to have been a member of the five consecutive Cup-winning teams, an NHL record, along with teammates Dickie Moore, Jacques Plante, Jean Béliveau, Doug Harvey, Bernard Geoffrion, Tom Johnson, Claude Provost, Jean-Guy Talbot, Don Marshall, Bob Turner and his brother, Maurice. In his 20-year career, Henri Richard etched his name on the Holy Grail 11 times, an NHL record that is unlikely to ever be surpassed.

A tenacious player with incomparable determination and perseverance, Henri did not let his size dictate his play and he went on to lead the franchise in games played (1,258) and ranked third in Canadiens history in assists (688) and points (1,046). His 388 career goals in the regular season (including 53 game-winning goals and 47 on the power play) rank third among centermen in team history, surpassed only by Jean Béliveau and Jacques Lemaire. In 1973, he became the ninth player in NHL history to reach 1,000 career points.

A gifted team player, a generous teammate and a born leader through his work ethic, Henri Richard was driven by team success and still had his fair share of individual accolades and honors. In 1974, he was the recipient of the Bill Masterton Memorial Trophy, which is awarded annually by the NHL to the player who best exemplifies the qualities of perseverance, sportsmanship and dedication to hockey. He was also the recipient of the Joseph Cattarinich Award as the Canadiens' Player of the Year in 1969 and 1973.

A reliable contributor to the Canadiens' offense during the regular season for two decades, Henri Richard was equally effective in the playoffs. In 180 postseason games, he recorded 49 goals and 129 points. He made his presence felt by tallying his first overtime goal - the Stanley Cup-clinching marker - in Game 6 of the 1966 Stanley Cup Finals against the Detroit Red Wings. In the 1971 Stanley Cup Finals, Richard scored the game-tying and Stanley Cup-winning goals in Game 7 against the Chicago Blackhawks to secure the club's 17th Stanley Cup.

Following his stellar career, the long-time captain received several tributes and honors. A man of few words, he was humbled when he received a long ovation at the Forum on December 10, 1975 as the Canadiens raised his number 16 to the rafters. Four years later, he was inducted into the Hockey Hall of Fame, before entering the Quebec Sports Hall of Fame in 1991. In 2017, Henri Richard was named one of the "100 Greatest NHL Players" in history as part of the League's centennial festivities. Towards the end of the 20th Century, he was named as one of the Montreal Canadiens Ambassadors alongside his brother, Maurice, Jean Béliveau, Guy Lafleur and Réjean Houle, representing the organization at public and corporate events.

Henri Richard is survived by his beloved wife Lise, his children Michèle, Gilles, Denis, Marie-France and Nathalie, 10 grandchildren and four great-grandchildren, as well as thousands of hockey fans who enjoyed watching the "Pocket Rocket" play in a Montreal Canadiens jersey.

The family would like to sincerely thank the staff at CHSLD Résidence Riviera for their wonderful care. They demonstrated incredible professionalism and humanity. The family would also like to thank the public for their heartfelt condolences and kindly requests that its privacy be respected during this difficult time.