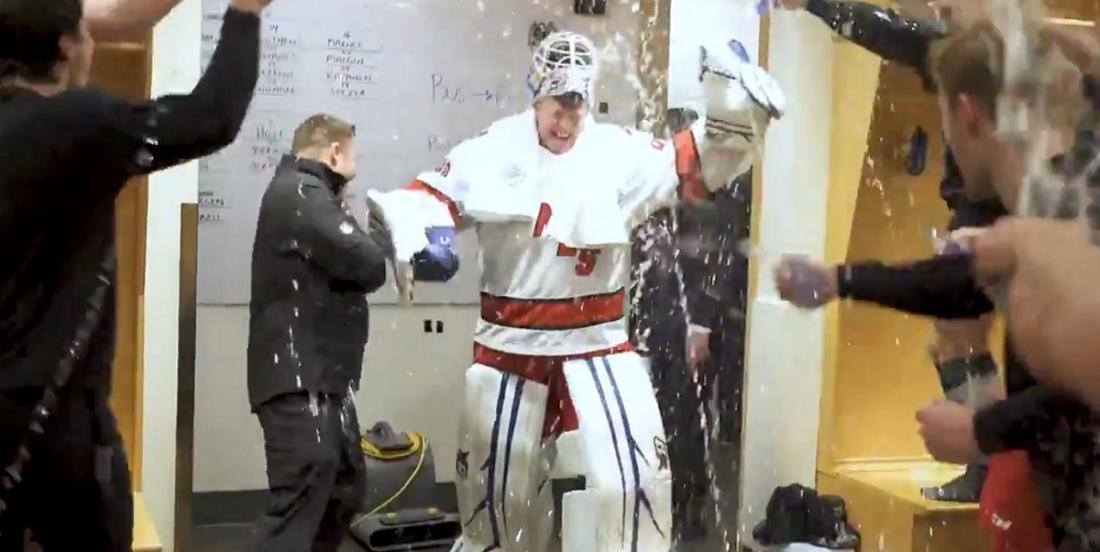 The Carolina Hurricanes will now have a memory that will last a lifetime, but that memory will never be sweeter to any man, woman or child than it is to the man at the center of it all, 42 year old goaltender David Ayres.

By now you've all heard the story of the emergency backup goaltender who was forced to step into the second period of a National Hockey League gameand play against the team he has spent his entire life cheering for, the Toronto Maple Leafs, only to pick up an amazing victory on his way to breaking multiple NHL records. It was a truly unique moment, the kind of moment that drives so many of us to follow sports as closely as we do, but what happened out on the ice this evening may not even have been the best moment of the night.

Following the game the Hurricanes players and staff all retreated back to the locker room where they celebrated their amazing win but lagging behind them was the aforementioned David Ayres. The emergency backup goalie was stopped on his way to the locker room and asked to do a series of interviews including one with veteran reporter Scott Oak of Hockey Night in Canada and as a result he was significantly slower getting to the locker room than his teammates were. When he finally did manage to break free from the media and head back to the locker room to remove his gear he was in for one heck of a surprise.

The Hurricanes were well aware of the fact that the cameras would be all over Ayres following the game and as a result they took the time to prepare a nice surprise for the man who will now forever be known as the "Zamboni goalie." As Ayres returned to the locker room the Hurricanes burst into the kind of celebration you would expect to see after a Game 7 win in the Stanley Cup Final, showering the emergency backup goaltender with beer and sending out a loud chorus of cheers that were loud enough to be heard even by members of the media who were outside the Maple Leafs locker room waiting for a comment.

Thankfully the Hurricanes caught it all on video and have made the footage available for all to see.