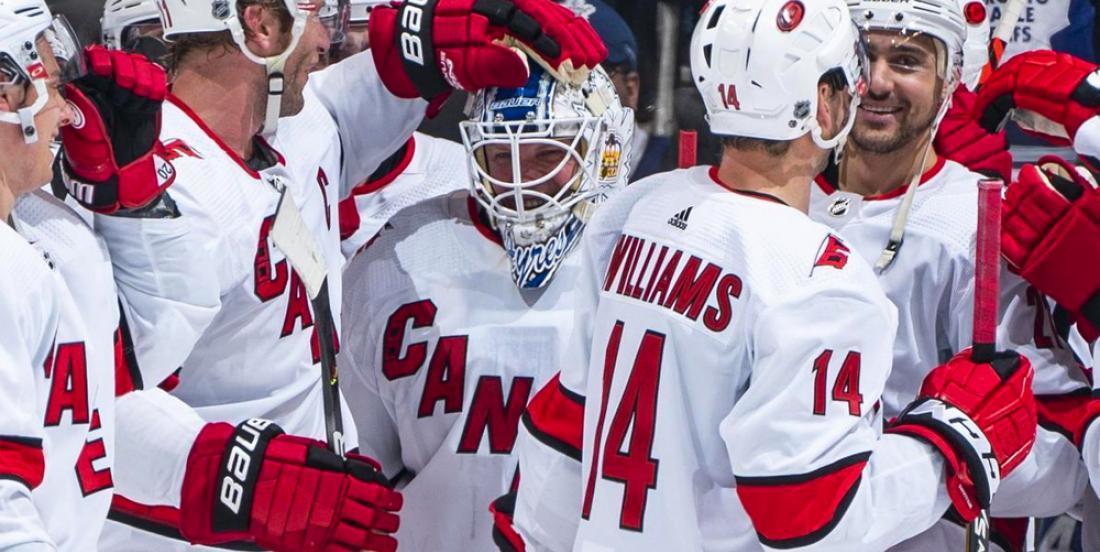 That a way, boys!

Ayres, of course, was called upon to act as the emergency goalie after Hurricanes netminders James Reimer and Petr Mrazek both went down with injury. Ayres looked shaky to begin, as you can imagine, but shut the door in the 3rd period and became the first NHL emergency backup to earn himself a win. It was a historic feat and one that has generated a TON of incredible moments.

Monday night though, Ayres was pressed back into emergency action again after Late Show host Stephen Colbert “injured” his hamstring during his opening monologue. Ayres, ever the professional, hopped in and didn’t miss a beat.

Priceless. Eat it up, David. Enjoy every moment of this. If only because this might be the last time that us as hockey fans get to witness such a historic event. According to Boston Bruins GM Don Sweeney, the league’s emergency backup goalie (EBUG) policy will likely be under review when NHL GM’s gather for their upcoming meetings.

In all seriousness, NHL insider Elliotte Friedman confirms that the league’s EBUG situation will indeed be on the docket next week at GM meetings in Florida.

The EBUG situation will be discussed at next week’s GM meetings in Florida. A couple of years ago, there was a movement to making every team hire an additional assistant/video coach with recent college/junior/professional goaltending experience. That person would be required to travel, so if this occurred, each team would have its own relatively young third goalie. (In the playoffs, teams travel with three.) The associated cost scuttled the idea.

Oh man, I really, REALLY hope the league doesn’t make any changes to this policy. Wait… I take that back, I hope they do make one particular change… I hope the league bucks up to pay these guys. Ayres, like Scott Foster of the Chicago Blackhawks before him, earned $500 for his role Saturday evening. Luckily though, the boys on the ‘Canes stepped up to make sure he was taken care of.

“It’s pretty special,” Hurricanes head coach Rod Brind’Amour said. “I told the guys after the game, ‘Thank him because that just gave (us) an incredible memory.’”

And thank him they did, says forward Sebastian Aho.

“Yes, we gave him a little bit of money,” Aho said.

“These guys,” Ayres said explaining his thoughts on the amazing night. “How great they were to me. The crowd in Toronto was unreal. Even though I was on the other team they were so receptive. Every time I made a save I could hear them cheering for me.”