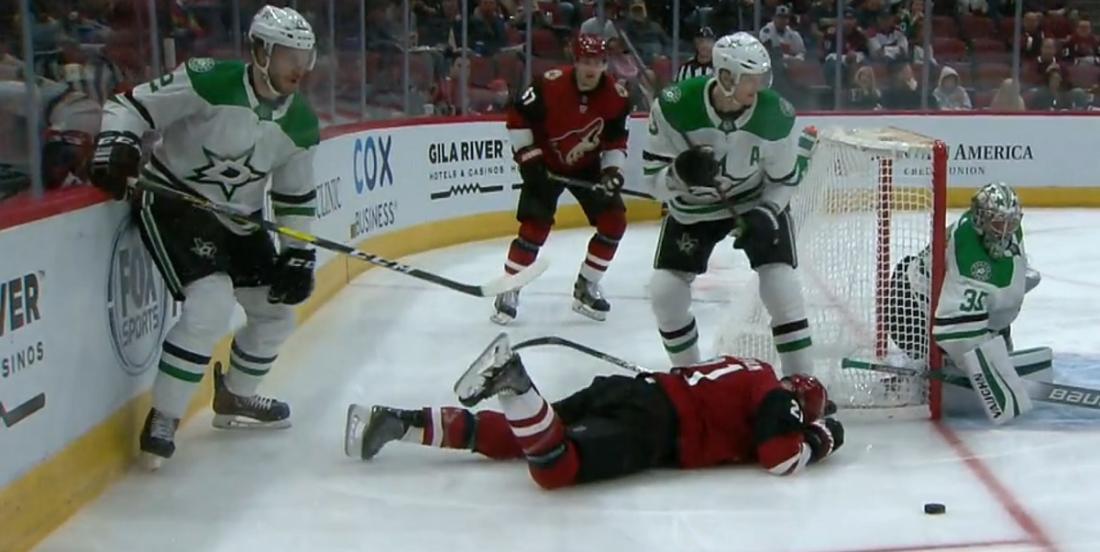 A rough couple of days for Derek Stepan.

Right now is not a good time to be Arizona Coyotes forward Derek Stepan.

On Sunday night the Coyotes faced off against the Dallas Stars and during the second period of that game Stepan came head to head with a giant. We were less than 3 minutes into the second frame when Dallas Stars heavyweight Jamie Oleksiak absolutely obliterated Stepan with a gigantic hit behind the Dallas Stars net, a hit that left Stepan down on the ice and feeling the ill effects of that blow. Although we did not know it at the time the impact of that hit was enough to leave Stepan with a concussion and he is now currently going through the National Hockey League's concussion protocol and will need to do so before he can return to action for the Coyotes.

This was a curious hit because, although it clearly caught Stepan up high, the 6'7 Oleksiak did initially drive the force of his blow through the body of his opponent. It was such a close call in fact that the officials initially ruled it a 5 minute major for a hit to the head, but thanks to the new rule regarding the review of majors it was eventually reduced to just a 2 minute minor penalty. Interestingly enough the rule does not allow a major to be simply wiped out but instead allows it to be reduced to a minor, so the 2 minutes that Oleksiak was awarded for interference may have only been awarded to him as a result of that quirk in the rule.

Head coach Rick Tocchet revealed after the game that Stepan was hurting but that he was also not very happy with the way things had gone down on the ice prior to his exit.

"He got dinged pretty good," Rick Tocchet said. "He's not too happy right now. I haven't really re-watched it and stuff like that. But hopefully he'll be OK."

What makes this situation even worse for Stepan is the fact that he was already hurting from a game last week. The veteran forward was struck in the face when Las Vegas Golden Knights forward Ryan Reaves tried to bat a puck out of midair, although no doubt this one was considerably worse.