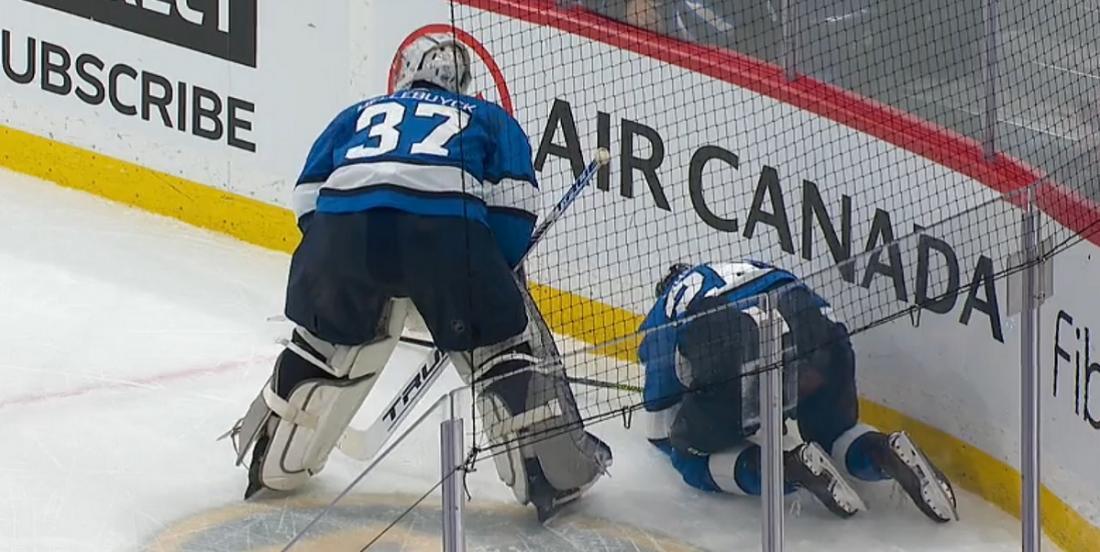 This one could land Chicago Blackhawks captain Jonathan Toews in some hit water.

Toews and his Blackhawks were facing off against the Winnipeg Jets on Sunday night and in the final few minutes of the game's third and final period, Toews took some liberties with Winnipeg Jets captain Blake Wheeler and put his team in the hole in the process. Toews delivered a fairly egregious hit to the head of the Jets forward as the two men were racing for the puck deep in the Winnipeg Jets zone. Initially the broadcast team called this one an unintentional or accidental high stick, however upon viewing some additional replay angles it became clear that the broadcast team was mistaken.

Instead the slow motion replay revealed that Toews, seemingly deliberately, raised his shoulder right under Wheeler's chin and took him out with a hit to the head. The Jets captain would remain down in the corner for several long moments and the play was eventually blown dead, but even then it was some time before Wheeler was able to regain his feet. Additionally Wheeler was clearly feeling unsteady after taking the blow as he could be seen bracing himself on the end boards, and even used those boards to pull himself to his feet after remaining on the ice for some time.

Wheeler would return to the bench under his own power but it appears as though the National Hockey League's concussion spotters had seen enough and they ordered the Jets to send Wheeler back into the dressing room, this in spite of the fact that we were in the final moments of a tight game at this point. No doubt that had to irk the Jets, although they would hold on to their lead and eventually dispatch the Blackhawks by a score of 5 - 2, but that could also mean some bad news for Jonathan Toews moving forward.

The hit that Toews delivered to Wheeler is exactly the type of hit that the league and its Department of Player Safety have been attempting to crack down on, and there's no doubt that the league is now very aware of this incident. The fact that this was observed and flagged by one of the NHL's own concussion spotters makes me believe that the NHL's Department of Player Safety is likely to review this play as well.