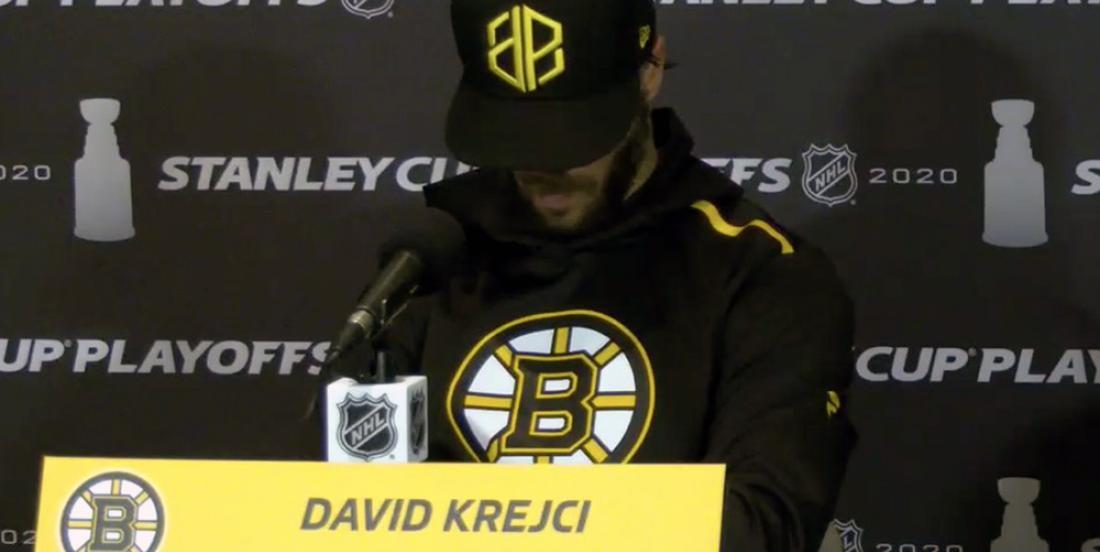 In case you missed it last night, the Boston Bruins were eliminated from the Stanley Cup Playoffs after a thrilling double overtime victory by the Tampa Bay Lightning in Game 5 of the teams' second round series.

It was an entertaining game with plenty of scoring chances at both ends, but in the end it was Lightning superstar defenseman Victor Hedman who dashed the Bruins' hopes with the double OT winner.

And with that the Bruins offseason begins. And it's sure to be an offseason full of question marks for the Bruins and for GM Don Sweeney. What happens to pending free agent Torey Krug? Is 42 year old captain Zdeno Chara done? Will goaltender Tuukka Rask return? You really get the sense that this could be the last kick at the can for this Bruins core. And you know who else feels that way? Bruins veteran David Krejci.

The longtime Bruins centerman showed real, open, raw emotion during his post-game press availability last night. Even breaking down in tears when discussing the season and the Bruins' future moving forward.

"It just kind of hit me after the game, the core group," Krejci choked out. "A few of us we have 1 or 2 years left and with the pandemic going on you never know what's going to happen. So it's a little sad right now."

Krejci's full comments including his thoughts on Krug potential leaving as a free agent:

Oof... that's tough. While fans and analysts have been critical of Krejci throughout the years, it's tough to criticize a guy for showing his true feelings in a moment like this. That's just pure, raw emotion and it's something that hockey players shy away from far too often. Kudos to you, Mr. Krejci.

And here's the thing... Krejci's not wrong either. At best this Bruins team has a 3 year window to win another Stanley Cup. Krejci himself even says they have 1 or 2 years left to bring home another Cup to Boston. Besides the obvious question marks in Rask, Chara and Krug, guys like Patrice Bergeron, Brad Marchand and Krejci himself aren't getting any younger. Sure, there are young studs on this team like David Pastrnak and Charlie McAvoy, but can they carry the full load when Chara, Rask, Bergeron, Marchand, Krejci, etc. can no longer do so?