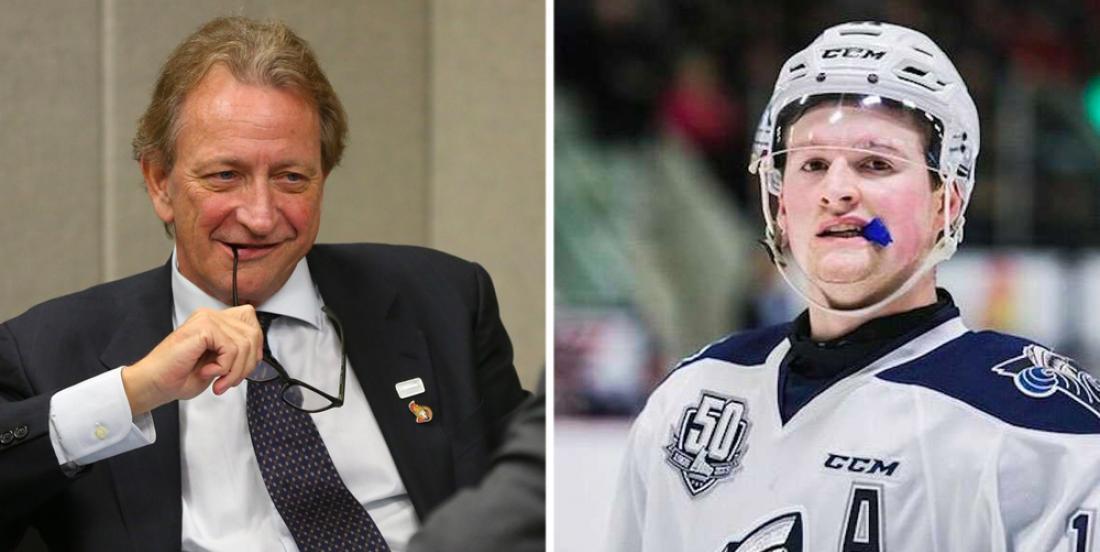 Don't look now, but the sad sack Ottawa Senators are building something special.

After shipping out star players like Erik Karlsson, Mark Stone, Matt Duchene, Mike Hoffman and others over the past few years the Sens have been... well, they've been awful. But with youngsters like Brady Tkachuk and Thomas Chabot already establishing themselves as star players in the NHL and with prospects like Erik Brannstrom, Alex Formenton and Drake Batherson on the way, there's reason to get excited about the team's future. Throw in 3rd overall and 5th overall selections in the upcoming 2020 NHL Entry Draft and there are even more reasons to get excited about this young team.

But while the Sens will get two good players at 3rd and 5th overall, they won't get blue chip prospect Alexis Lafreniere. The top rated prospect is expected to go #1 overall to the New York Rangers, but there were rumours last week that Sens general manager Pierre Dorion was open to the idea of trading his 3rd and 5th pick to Rangers GM Jeff Gorton in exchange for the 1st overall pick. BS says Sens owner Eugene Melnyk though.

Melnyk personally reached out to Senators insider Bruce Garrioch of The Ottawa Sun to throw cold water on the rumour.

“The idea of trading our 3rd and 5th picks for the No. 1 pick is nonsensical,” Melnyk said in an email to Garrioch on Monday. “We’re very excited to welcome our many new Ottawa Senators that will come to us via the upcoming draft.”

Interesting. For a couple reasons...

First off, why? As good as this draft is, there simply anyone else in Lafreniere's league. He's the best player in this draft and it's not even close. He's exactly the type of player that the Sens could build around and, frankly, he'd be a perfect fit on a young, up and coming team like the Sens. So... why?

Secondly, why is the team's owner responding to trade rumours? Could you imagine Rangers James Dolan talking meddling in issues like... actually bad example. Dolan is probably the most meddling owner in professional sports, but I digress. The point is, it's not Melnyk's job to address issues like this and the fact that he is only serves to prove a larger point that he is over-involved in the day to day activities of hockey operations.

“We feel it’s great for the Senators’ organization, for our fans, we’re going to draft two players who are going to be impactful players for many years to come. We’re really excited about having No. 3 and No. 5 join us when the draft comes. With the trades that we’ve made, getting that No. 3 and No. 5 pick, we’re just continuing on the with the plan and doing the rebuild the way we want to do the rebuild."