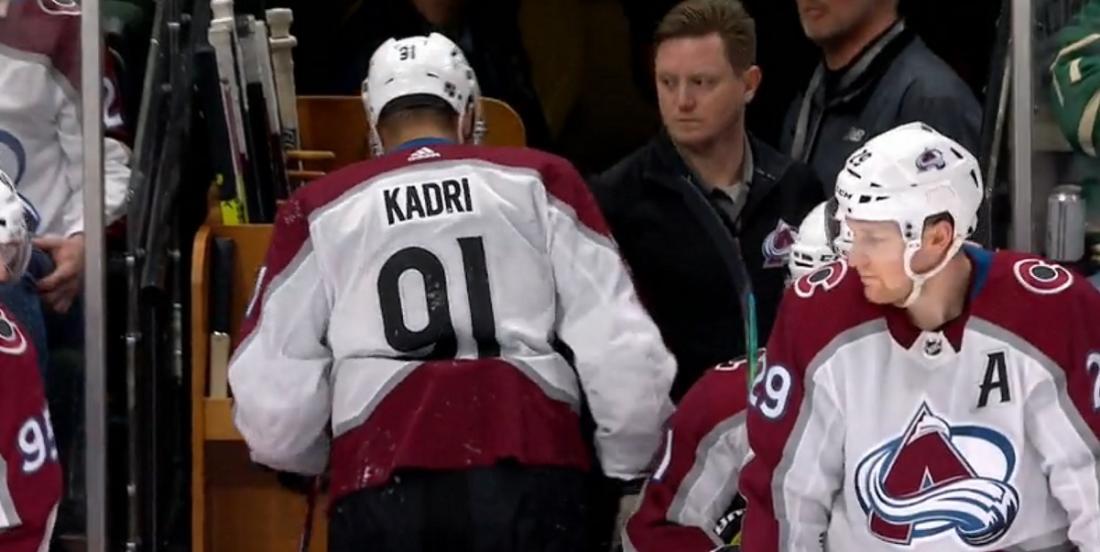 The Colorado Avalanche may have just lost veteran forward Nazem Kadri to a rather unfortunate incident.

Kadri and his Avs were facing off against the Minnesota Wild on Sunday night and during the closing seconds of the game's second period the Avalanche forward appeared to suffer a significant injury to his right leg. Kadri was lined up at the faceoff circle against Minnesota Wild center Luke Kunin but found himself injured almost immediately after the puck hit the ice. There's no other way to describe this other than to say Kunin simply muscled Kadri out of the faceoff circle, knocking the Avalanche forward off balance and causing him to fall backwards down to the ice.

Although we do not know the nature of Kadri's injury at this time based on the video evidence that we have available I strongly suspect that the right leg is effected area. As Kadri was falling backwards the weight of his body came crashing down on that leg as it buckled awkwardly under his body weight, seemingly bending in a way that it was not meant to do. Kadri was immediately out of commision following the fall to the ice and he needed several moments to get back to the Avalanche bench in spite of the fact that play continued. In fact the Wild were gifted a 3 on 2 going the other way as a result of this injury, but luckily for the Avalanche the Wild could not capitalize on the opportunity.

Once he got back to the bench we saw more signs that Kadri's right leg was the source of his injury as Kadri refused to put any weight on it. Instead Kadri limped his way down the hallway, using his stick as a crutch to support himself, and eventually back into the Avalanche's locker room. The silver lining here, if you're looking for one, is that Kadri would come back out to test his leg later in the game. That could mean that he has avoided the worst of it and may simply be dealing with some type of high ankle sprain rather than something like an MCL or ACL tear.

No word yet from the Avalanche on Kadri's status.