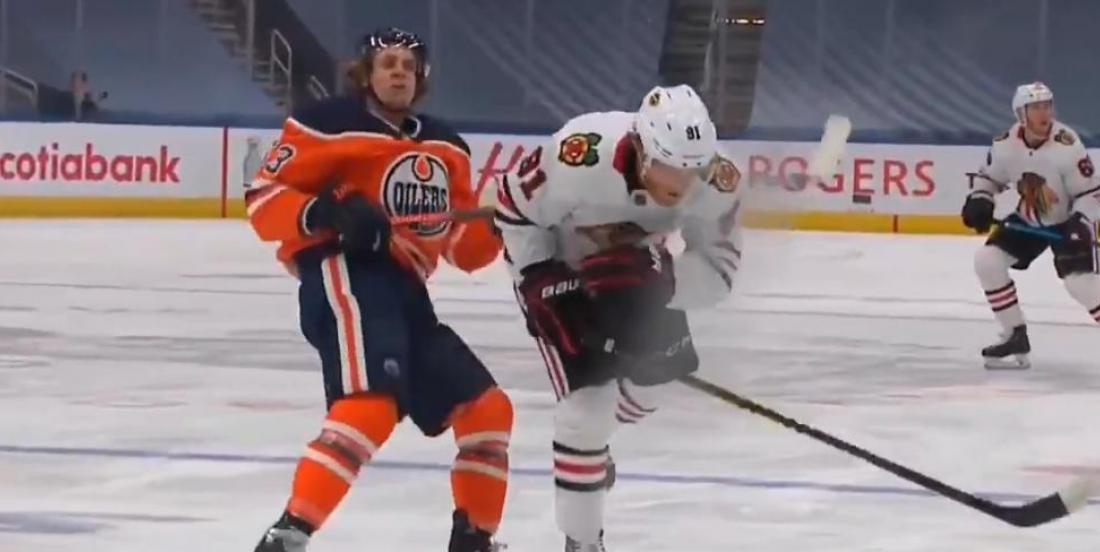 We all knew this was coming after the National Hockey League's Department of Player Safety announced a hearing for Chicago Blackhawks forward Drake Caggiula, but now it has been made official.

According to an official announcement from the NHL, the league has issued a one game suspension to Caggiula following what the Department of Player Safety has described as "an illegal check to the head." The hit occurred during Game 1 of the Qualifying Round matchup between the aforementioned Blackhawks and the Edmonton Oilers, and it was Oilers forward Tyler Ennis who was on the receiving end of that hit.

It would have been bad enough had Ennis been the victim of a mere hit to the head but not only did the Oilers see one of their own take a high hit, the player on the receiving end of the hit was then called for a penalty. The NHL officials on the ice ruled that Ennis had actually been the one to interfere with the aforementioned Caggiula, this after he had in fact been the victim of a blow to the head. This would result in the Oilers giving up a man advantage to the Blackhawks, and to make matters worse Ennis would be forced to retreat to the dressing room following the hit from Caggiula. It seems however that the league has seen what the officials on the ice did not, and although this will no doubt now turn into a frustrating situation for fans in Chicago, I do believe there is a wrong that should be made right here.

As has been the NHL's policy during playoffs in the past, every playoff game is held to the equivalent standard of two regular season games, which means that this effectively would have been a two game suspension for Caggiula in the regular season. Given that playoff games are considerably more valuable it makes sense that Caggiula will only get a single game here, although no doubt he will continue to be a marked man come Game 3 when he does make his inevitable return to this series.

Do you think the 1 game was warranted? Let us know your thoughts on the suspension in the comments. For a full breakdown on the NHL's ruling check out the video below.