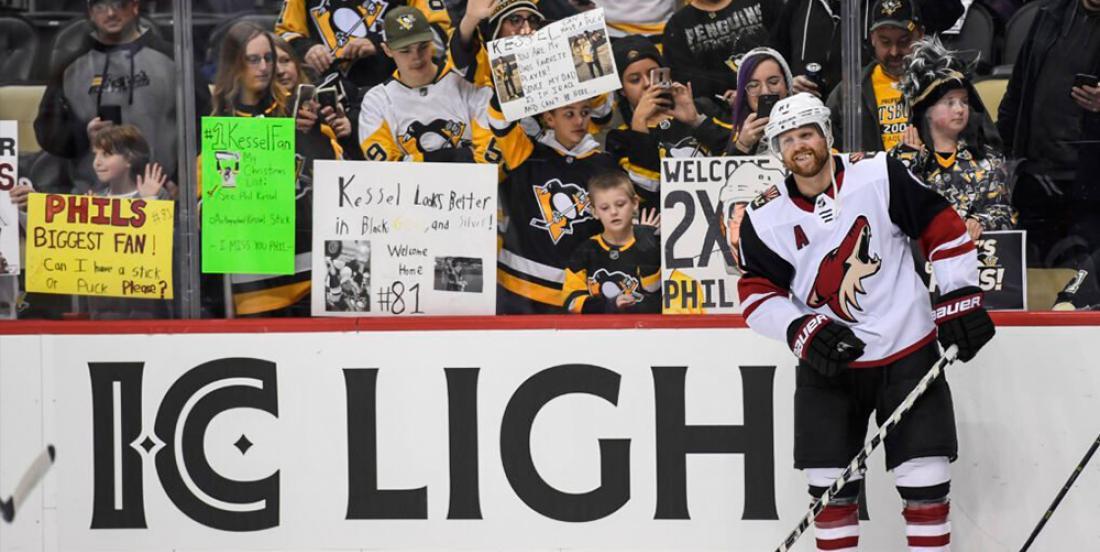 It's been one year since the Pittsburgh Penguins traded fan favourite sniper Phil Kessel to the Arizona Coyotes in exchange for Alex Galchenyuk and defenseman prospect Pierre-Olivier Joseph. In the 12 months that have passed there have been many theories as to why Kessel was traded, but now Penguins insider Josh Yohe of The Athletic is finally digging into the details surrounding Kessel's departure.

According to Yohe, here are the working theories:

• Kessel asked to be traded.

• Kessel’s cap figure was too high.

• Kessel was past his prime.

So... what REALLY happened behind the scenes?

Yohe picks these theories apart one by one to get to the root of things.

There’s an element of truth here, but to suggest they couldn’t work together probably isn’t accurate.

Of course, there’s also no question that Kessel comes with an expiration date with coaches. Those who have coached him rarely speak well of him. And consider the words of Jack Parker, the legendary former Boston University coach, who happens to be Sullivan’s close friend and mentor: “I wouldn’t coach Kessel if he was playing across the street, to be honest with you. I know Michael had his battles with Kessel. But you know what? He got a lot of out Kessel and they won championships together.”

A former teammate of Kessel’s, who prefers to remain anonymous, summed up Kessel’s feelings toward Sullivan this way: “I don’t think Phil hated Sully. I just don’t think Phil likes coaches or being told what to do. Sully got on him during a flight one time for not playing more of a two-way game. When Sully went back to his seat, Phil looked up and said, ‘Fuck him.’ We all liked Phil a lot. We still do. And we all like and respect Sully a ton. He’s a great coach. But they had their moments.”

Rutherford maintains that the relationship between Sullivan and Kessel wasn’t the reason for the trade.

“There were times when they weren’t going to agree on things, like what line he was on and whatnot,” Rutherford said. “But it was probably blown out of proportion.”

Kessel asked to be traded

This one largely remains a “he said, he said” situation.

On the evening Kessel was sent to Arizona, Rutherford surprised reporters when he said that Kessel asked to be traded numerous times during the 2018-19 season.

Later that night, Kessel cryptically offered a denial of sorts.

“I’m not sure that’s exactly what happened,” Kessel said. “Jim came to me one time and said, ‘(You’ll) never be a Penguin again.’ I think he’s mistaken a little bit there. But I don’t want to get involved in that. I’m not here to tell you what really happened and the real truth, but whatever Jim wants to say.”

So, what is the truth?

Kessel started on a hot streak in his fourth season with the Penguins, but stumbled badly in the season’s second half and never seemed to find his groove. Sullivan has never been more frustrated with the Penguins than he was in the spring of 2019. They were playing a freewheeling brand of hockey that the coach knew wouldn’t work in the postseason, especially against the defensively-tight Islanders. Kessel was one of the ringleaders.

Days after the Penguins were swept by a team with clearly inferior talent, Rutherford let other general managers know that changes were coming to the Penguins and the Kessel was available. Multiple sources in the organization confirm that Kessel did indeed ask Rutherford for a trade. Nobody in the organization believes Kessel demanded a trade, but that Kessel and Rutherford came to a mutual agreement that it was best for him to move on.

“It’s not something that I want to get into,” Rutherford said a year later.

Kessel’s cap figure was too high

Given Kessel’s productivity and age, the $6.8 million that the Penguins paid him every season — remember, the Maple Leafs pick up $1.2 million of his contract — seemed perfectly reasonable.

Rutherford, when asked about it last week, suggested that money was the biggest reason the Penguins ultimately moved on from the mercurial one.

“It was ultimately a cap thing,” Rutherford said. “There’s really not that much more to talk about. It’s the same with (Marc-Andre) Fleury. Would I have liked to have kept Fleury? Of course. Would I have liked to have kept Kessel? Of course. You get forced to make certain moves because of the cap. Were there some issues with Phil? Yeah, but the cap was the biggest thing.”

“So, we opened up some cap space and got a really good prospect. It was the right thing to do. I just view that trade as a cap thing more than anything else. There weren’t that many issues with Phil. A few, but that’s not why he was traded. We all really like Phil. We appreciate what he did for our team. We really do. It just gets to the point that teams are forced to move certain guys.”

Kessel was past his prime

No one likes to touch this one out of respect for Kessel. No one, from Rutherford and Sullivan on down, will acknowledge what the numbers appear to indicate, that Kessel is on the decline.

Kessel turns 33 in October and is legendary for his relative indifference to keeping himself in top condition. It would seem logical that his game would begin to decline around this age.

The numbers offer an unforgiving view of a star who likely has seen his best days. Something happened to Kessel around the beginning of February in his last season with the Penguins and he’s never really recovered.

In the past 102 games — 70 with the Coyotes and 32 with the Penguins — Kessel has managed only eight even-strength goals. Eight.

To put that in perspective, Kessel scored 25 even-strength goals in his previous 102-game stretch.

While plus-minus can be a very deceptive statistic, when a player is located at one or extreme or the other, it warrants attention. In Kessel’s past 164 games — the equivalent of two full seasons — he is a minus-45. Kessel was a plus-11 in his previous 164 games.

Obviously Kessel had more talent to work with in Pittsburgh, but his numbers were already in decline. It’s been more of the same in Arizona and his head coach doesn’t sugarcoat what he is seeing.

“Phil would look you right in the eye and tell you he had a bad year,” Tocchet said. “I know he is disappointed with the season that he had. We’ve talked about it. He knows he needs to be a lot better.”

Here’s the bottom line about Kessel’s time in Pittsburgh:

• His teammates, to a man, loved him and found him entertaining.

• Coaches never expected him to be a Selke candidate and, while they knew he could be difficult, tolerated his quirks because of his talent and big-game greatness.

• When the Stanley Cup years started to get distant in the rearview mirror, it was determined that Kessel’s time had come to an end.