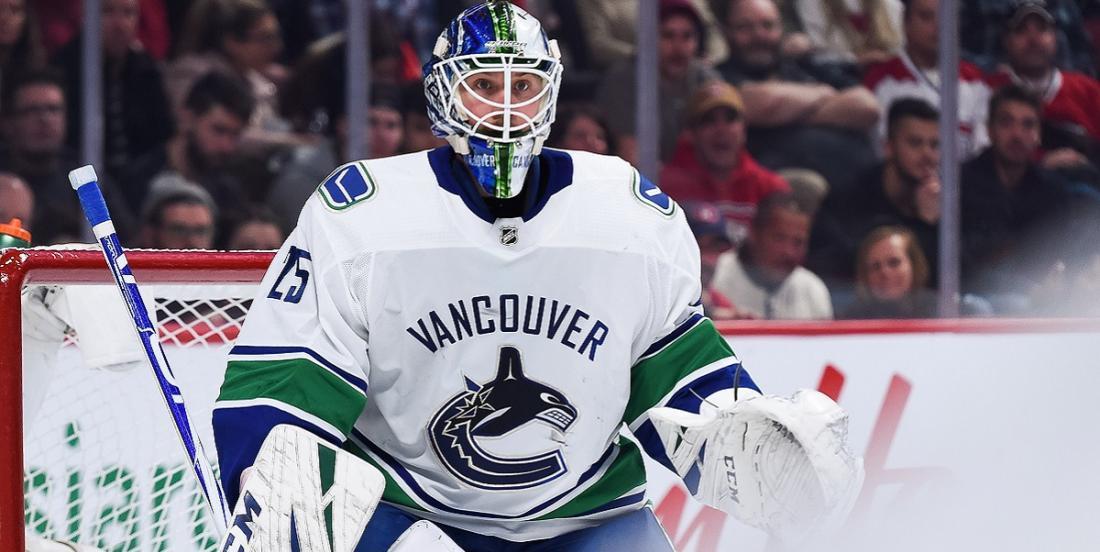 Not an easy decision for Jim Benning.

Following an impressive showing from a young Vancouver Canucks team in the 2020 Stanley Cup playoffs everyone is raving about just how well the team performed and for good reason. The Canucks showed the world that they are a team to be feared and one that will only grow more frightening in the years to come with their young and developing superstars Quinn Hughes and Elias Pettersson, but they also may have shown a little too much.

Coming into the Stanley Cup playoffs the fact that veteran goaltender Jacob Markstrom would be re-signed by the team was forgone conclusion and the way he performed for the Canucks in the playoffs only cemented that belief in the minds of many. But then he got hurt and now Vancouver Canucks general manager Jim Benning is facing the kind of decision that I think fans will be questioning years from now regardless of what he decides to do. You see the injury to Markstrom paved the way for Canucks rookie goaltender to step into the spotlight in the biggest pressure moments of them all, while facing elimination in the Stanley Cup playoffs.

It was only a 4 game sample size in the playoffs but Demko was so outstanding in those 4 games that I suspect fans in Vancouver will be talking about his playoff heroics for years to come. Over those 4 games Demko recorded a ridiculous 0.64 goals against average and an equally absurd .985 save percentage, this against a Las Vegas Golden Knights that up until that point had decimated their opposition. Demko put himself on the map and this now forces Jim Benning into a corner.

It is a situation that reminds me of the one we saw almost exactly 10 years ago. That time it was the Montreal Canadiens who had an extremely difficult choice to make between goaltenders Jaroslav Halak and Carey Price, with Canadiens general manager Pierre Gauthier at the time choosing to trade Halak in order to make room for the young Carey Price. Now Jim Benning will have to make a choice, will he offer Markstrom the big new long-term contract he will undoubtedly be seeking as a soon to be unrestricted free agent or will he save that cap space and gamble on his young star in the making in the form of Demko?

I've seen a lot of comments online suggesting that Demko should be the choice here and I don't necessarily disagree. At the start of the article I mentioned Quinn Hughes and Elias Pettersson and both those young men will be in line for some big new contracts in the new future, so Benning must seriously consider the long term cap implications of signing a goaltender to a lucrative deal. There are also the short-term salary cap implications to think of here as well. The Canucks  have both forward Tyler Toffoli and defenseman Chris Tanev on their roster and both men are pending unrestricted free agents which means they will require new contracts if Vancouver wants to keep them moving forward.

There would be obvious downsides to letting Markstrom walk however and one of the most obvious ones in my opinion is being widely overlooked. What if Markstrom were to sign with a rival team? What if he even signed with a rival team inside of your own division?

The Calgary Flames have had goaltending issues for some time now and although Cam Talbot did appear to come on strong in the latter stages of the regular season and the playoffs I would have my doubts about him as a long term solution. David Rittich hasn't been good enough either and this would be a move the Flames could make happen with Talbot a free agent this offseason and with Rittich only having 1 more year to go on his current deal.

What about the Edmonton Oilers? This one is far less likely in my estimation given that they have Mikko Koskinen under contract for 2 more years at $4.5 million per season, but after both he and backup Mike Smith had underwhelming performances in the playoffs I would not be at all surprised to see general manager Ken Holland try and improve at the position if a player like Markstrom suddenly became available.

Given the free agency of Tanev and Toffoli as well as upcoming contracts for Hughes and Pettersson I do think letting Markstrom walk is within reason, but there are also so serious potential pitfalls here for Jim Benning.