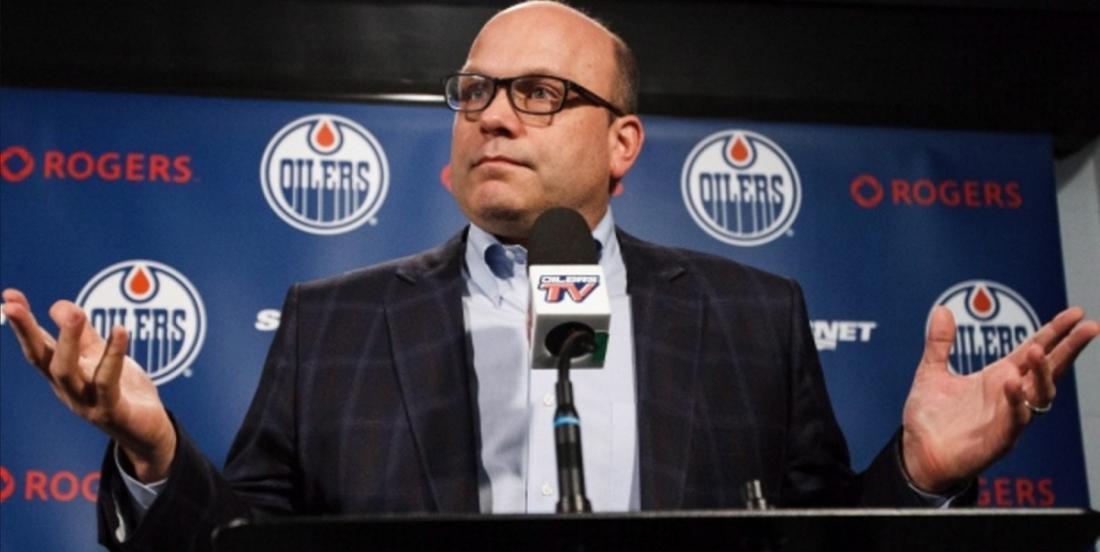 I have never understood why anyone believes in Peter Chiarelli as a hockey executive and after a recent interview with National Hockey League insider Bruce Garrioch of the Ottawa Sun I find it even more difficult to believe that Chiarelli remains relevant when it comes to discussions about hiring a general manager at the NHL level.

During the interview Chiarelli appeared to take responsibility for his failures in Edmonton by stating that he deviated from his plan and failed as a result, the only problem is that it makes Chiarelli seem delusional about what actually happened rather than coming off as a man accepting responsibility for his catastrophic failures as a general manager. Chiarelli told Garrioch that it was the taste of success on a struggling franchise that led him astray.

“You go in with a longer look and in this day and age it’s easy to stray from that longer look especially when you make the playoffs for the first time in 10 years and you win a round,” Chiarelli said as per Garrioch. “I knew it was coming and I should have been more forceful in my position on where we were in the plan but it’s hard because you’ve got paying customers, an owner and people around you that feel you should take the next step.”

Garrioch goes on to state in his article that Chiarelli did not deserve to be fired in Boston:

Chiarelli had worked his whole life and the thought of being out of a job didn’t sit well with him. He didn’t deserve to be fired in Boston and there’s a lot of players still on the roster there that he brought in.

Why? People talk about Chiarelli as this mastermind who built a cup contender in Boston but I would argue that the Bruins became a success in spite of Chiarelli's meddling. Everyone looks back to 2006 as the year that the Bruins core was built and with Chiarelli being hired in July of that year you can be forgiven for giving him credit for building that core, except he didn't. Current general manager of the New York Rangers, a team that has been managed very well by the way, is Jeff Gorton a man who was appointed interim general manager of the Boston Bruins in March of 2006. Here are some of the moves Gorton made in between the time he was appointed and Chiarelli was hired:

Traded Andrew Raycroft to the Toronto Maple Leafs for Tuukka Rask, a trade that will likely be regarded as one of the worst in Leafs history for a very long time.

Ran the 2006 NHL Entry Draft for the Bruins where again he picked up some guys you may have never heard of, Milan Lucic, Brad Marchand and Phil Kessel.

If those names sound a lot like the Bruins core that would go on to so much success, and in some cases continue to succeed for the Bruins to this very day, that is because that is exactly who they are. They were all acquired in one way or another by Jeff Gorton, not by Peter Chiarelli, and it was Chiarelli's influence as general manager that prevented them from achieving more success than they did. Chiarelli has merely received credit for what was in reality an amazing few months from Jeff Gorton, a man who doesn't get anywhere enough credit for his role in building that team. Peter Chiarelli is not a good general manager, he never has been, and my final take away from the Garrioch article was a note about Chiarelli getting interviewed for openings around the NHL.

He interviewed for the GM openings with expansion Seattle and Minnesota last summer that went to Ron Francis and Bill Guerin respectively.

Both of those teams dodged a bullet in my estimation, but it remains laughable to me that Chiarelli continues to get looked at for these positions when he has never demonstrated the ability to be a competent NHL GM.