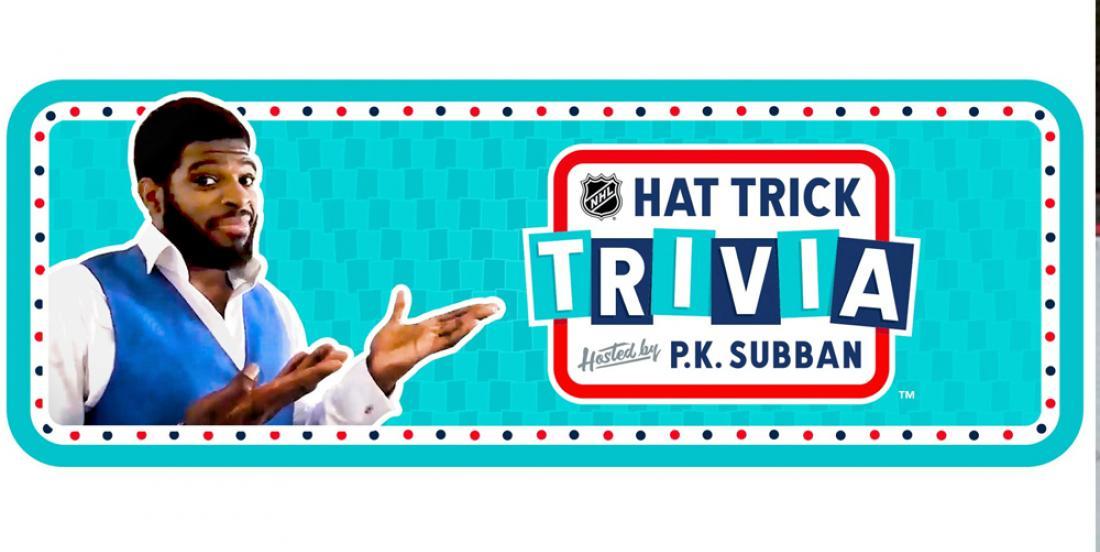 Seriously? Seriously… check this out.

Unable to deliver games to their fans, the NHL has taken a unique approach with respect to their broadcast time these days. Today, the league announced the launch of a bran new quiz show hosted by New Jersey Devils blueliner P.K. Subban. Of course… who else?

Here’s the premise: Each week, three hockey fans will compete in a hockey quiz for a chance to win prizes. The NHL Hat Trick Trivia Quiz will be broadcast every Saturday at 12pm ET on Sportsnet and 12:30pm ET on the NHL’s Facebook page. Subban will host the show and will be joined by other NHL players and celebrities, as well.

Read below for more info:

NEW YORK / TORONTO - The National Hockey League (NHL®) continues to bring innovation and entertainment to hockey fans with the launch of NHL Hat Trick Trivia™ Hosted by P.K. Subban , a new weekly show premiering on Saturday, April 11. The 30-minute show will feature fans answering a trio of hockey trivia questions from their homes, along with appearances from NHL players and celebrities, for the chance to win NHL prizes. Hosted by New Jersey Devils defenseman P.K. Subban, the program will air every Saturday at Noon ET on Sportsnet and at 12:30 p.m. ET on the NHL's Facebook, YouTube and IGTV platforms. NHL Network and NBCSN will air the show every Tuesday at 9:30 p.m. ET and Wednesday at 6 p.m. ET, respectively, starting next week. Click here to watch the trailer.

"This show is just one of the many ways in which we're trying to entertain hockey fans during our pause," said NHL Chief Content Officer Steve Mayer. "P.K. has a great energy for a show like this. We are set to welcome our fans, players and celebrities and have some fun giving away prizes. We hope that we have put together a fun format where the audience can play along."

"With the NHL season on pause, as our society works to combat COVID-19, our hope is that this show will provide fans with a sense of community, knowledge, and of course a lot of entertainment until we can all get on the ice once again," said Subban. "I'm looking forward to fans experiencing this show with us."

Each contestant will be asked three hockey trivia questions. NHL players and celebrities will also be featured in the show. The contestants in the debut episode include a St. Louis police officer and a New Jersey paramedic currently on the front lines in the fight against coronavirus, with a special appearance by Tampa Bay Lightning forward Pat Maroon.

NHL Hat Trick Trivia™ Hosted by P.K. Subban joins a robust lineup of weekly programming the NHL has introduced to keep hockey fans connected to players and the game during the pause in the 2019-20 season. From the #HockeyAtHome interview show, produced and distributed by NHL Original Productions, to weekly virtual press conferences with players and coaches, the NHL is working to deliver a steady stream of engaging content to hockey fans around the world.

Last month, the League launched NHL Pause Binge™, a digital portal that aggregates video, editorial and digital content on NHL.com; the NHL app; and across the NHL's social channels on Twitter, Facebook, Instagram and TikTok. Fans who visit NHL.com and the League's official YouTube channel will find a curated collection of NHL Original Productions content, including critically-acclaimed, behind-the-scenes programs "Road to the NHL Winter Classic," "Behind The Glass" and "NHL All Access"; full-length classic NHL games dating from the 1950s to present day; 2019-20 season snapshots featuring memorable moments for each of the League's 31 teams; profiles on top rookies and draft prospects; a look back at top Stanley Cup® Playoffs and Stanley Cup® Final moments; and free access to stream full replays of games from the 2019-20 regular season accessible via the scores and schedule pages of NHL.com and the NHL app and in Canada via NHL LIVE.