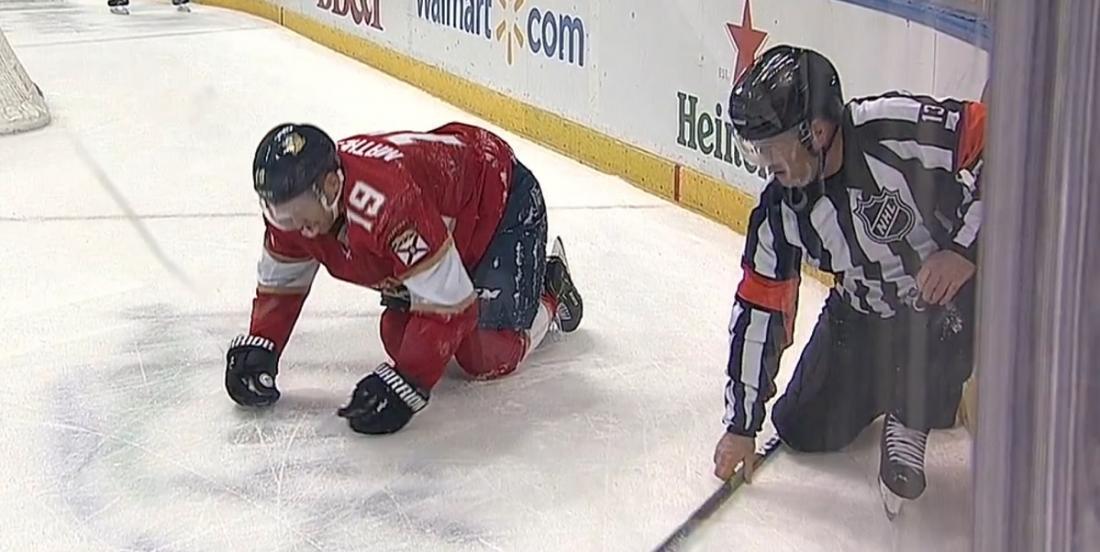 I have to imagine that Florida Panthers defenseman Mike Matheson is gonna be fuming about this one.

Matheson and the Panthers were facing off against the Toronto Maple Leafs on Sunday night but unfortunately for Matheson he should have been watching out for more than just the players from the opposition on this night. During the game's opening frame Matheson was leveled by a big hit in the corner, but the hit did not come from a member of the Maple Leafs. Instead Matheson was leveled by a big hit from National Hockey League official Dan O'Halloran.

Matheson was chasing the puck into the corner and was trying to beat Toronto Maple Leafs captain John Tavares in a race to get there when suddenly he ran into a wall that looked an awful lot like a zebra. O'Halloran of course did not intentionally deliver a hit to Matheson but instead was simply caught off guard by the puck's sudden change in direction and was unable to get out of Matheson's way in time as a result. Interestingly enough it looked as though Matheson never saw the official in spite of the fact that he charged right into him, presumably all of his attention was focused on the puck and the aforementioned Tavares. O'Halloran on the other hand did see the Panthers blue liner coming right at him and as a result he was able to get his arms up and protect himself from the blow.

O'Halloran seemed fine after the hit but Matheson on the other hand was slow to get up and looked to be a man that was trying to shake off the cobwebs. He was able to get back up under his own power though and he did remain on the Panthers bench, but this one may have hurt him in more ways that one. I have no doubt at the very least that his teammates will be letting him hear about the time got leveled by a referee for a little while.

As for O'Halloran I suspect he will be hearing form the NHL about this one. Although clearly a mistake you simply can not have your officials potentially injuring players.