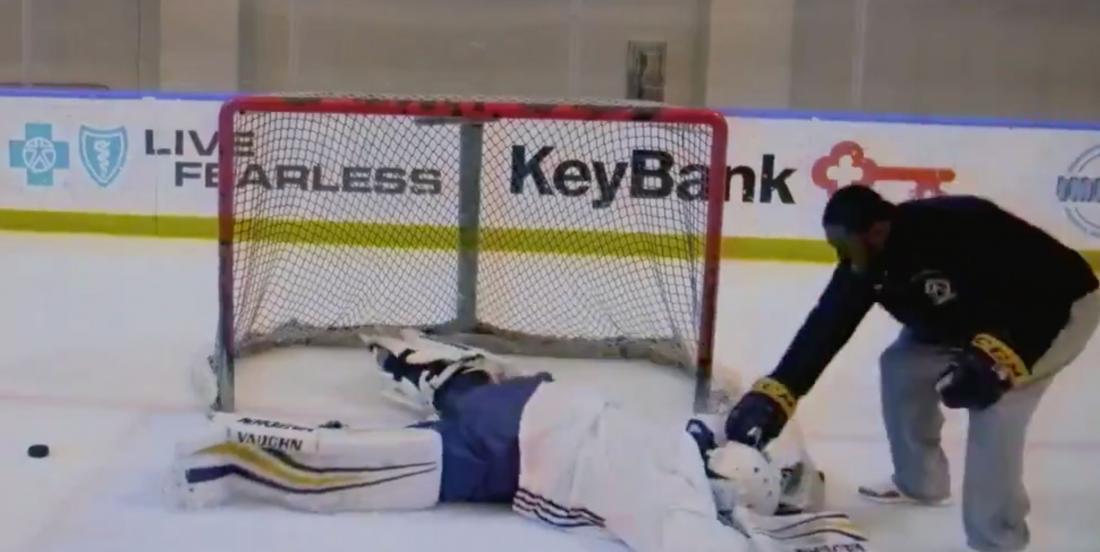 The Buffalo Sabres are having fun this season, and it shows on and off the ice.

The club went further in their goal to having fun as they teamed up with Buffalo Bills cornerback Tre’Davious White to make this hilarious spoof promo video on the NFL player's goalie school.

The guy has never played hockey but he sure knows how to entertain NHL fans. Sabres netminder Carter Hutton has joined in on the fun, jokingly saying he attended the “Tre White goalie academy” this offseason.

White and Hutton have gone back and forth on social media and even put together a first video that went viral in which the cornerback proclaims he was an “All-American” goalie his home state of Louisiana, telling teammates he played for the Shreveport Mudbugs. Hutton played the part and calls White "someone I looked up to, idolized."

In the video released by the Bills, White attends a Sabres game, where he's asked about his favorite player.

"Forty," he answered. "Goalie. Sutton. We just got him, right? Hutton, yeah." Hutton joked that White's been giving him goaltending tips since arriving in Buffalo. The video, produced by One Buffalo, an initiative created by Kim Pegula to unite fans of the Bills, Sabres, Beauts, Bandits and Rochester Americans, was only the beginning.

White tweeted throughout the Sabres' 10-game win streak, calling Hutton his "protege" after a 25-save performance in a 2-1 shootout win against the Winnipeg Jets on Nov. 16.

The two athletes have now joined up once again for another video, which was teased by White last week. The Pegula Sports and Entertainment video team released another hilarious spoof promo video which features White, Hutton and former Sabres goalie and current broadcaster Martin Biron. Other Sabres players are also seen learning White's tips on celebrating a goal.

"I got a kick out of it," Hutton said with a laugh to the Buffalo News. "Something fun to bring the two sports together. He was obviously a good sport. A majority of guys in that position have pretty funny attitudes. I shy away from the social media stuff. I just try to play my position. But it's definitely great. We haven't really had a chance to meet each other yet in person. Other than the hockey school, of course."