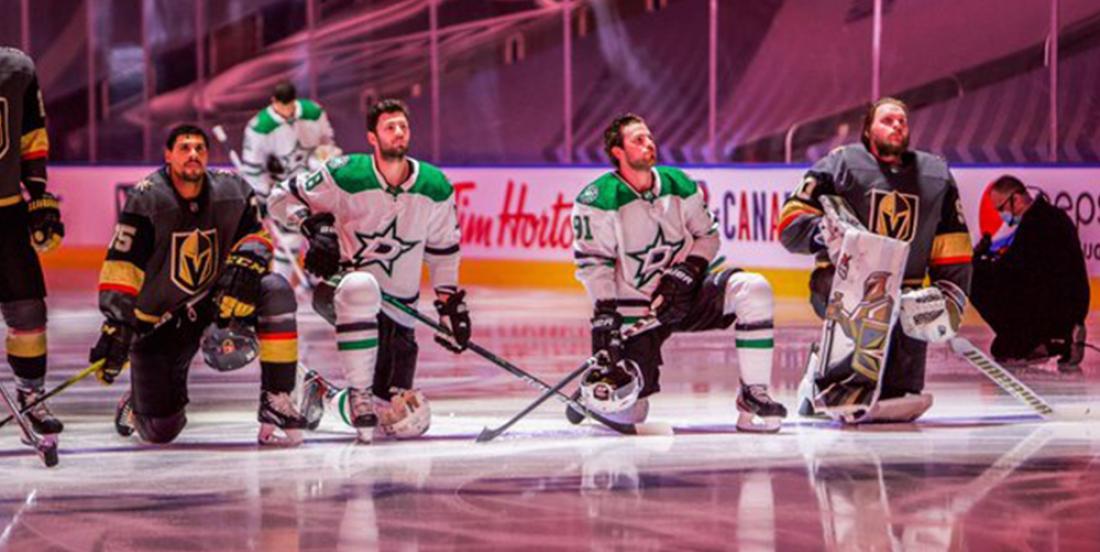 The two opponents come together to highlight an issue bigger than hockey.

In case you missed it this past weekend, Minnesota Wild defenseman Matt Dumba became the first NHLer to officially "take a knee" during the singing of the U.S. national anthem as a form of silent protest against racial injustice. Dumba made an impassioned speech before the Chicago Blackhawks and Edmonton Oilers dropped the puck for Game One of their qualifying series. The next evening Dumba raised a fist into the air while the anthem played prior to his team's game against the Vancouver Canucks.

Check it all out below:

Yesterday, Dallas Stars forwards Tyler Seguin and Jason Dickinson, as well as Vegas Golden Knights goaltender Robin Lehner and forward Ryan Reaves elected to join Dumba in silent protest by taking a knee during the singing of the Star Spangled Banner prior to their Round Robin Series game.

Suffice it to say that this statement on behalf of Seguin, Dickinson, Lehner and Reaves made waves across not just the NHL, but the entire sporting world. In fact, it even garnered the attention of U.S. President Donald Trump who took to Twitter to voice his displeasure.

Personally, I have no problem with the protests. Does it offend me? No, but I can certainly understand and appreciate how it might offend some people. I would personally never kneel during the singing of any national anthem, but that's just my personal belief. I have too much appreciation for the men and women who have served to guarantee my own freedom to take a knee. But again, that's just my opinion and I would never judge someone for feeling or acting differently.

What's most interesting to me is the fact that Reaves after first stating that he had no plans on protesting, evidently had a change of heart. Check out Reaves' thoughts on the situation just one day before deciding to take a knee:

It certainly sounds like Reaves had a second thought on things, or that someone got in his ear a bit and made him see things differently. Kudos to him for being open minded. In fact, he had such a change of heart that it was actually he who approached Seguin to see if he'd like to join in in the protest that he and Lehner were planning.

So, what was the group looking to accomplish with their protest?

Dickinson sums it up best: