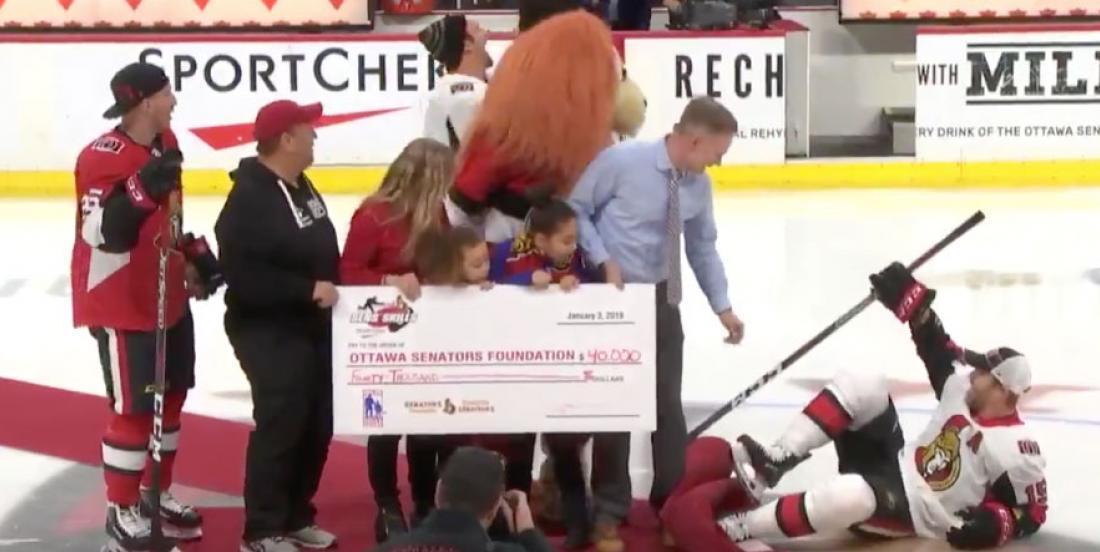 It may be a day off for the Ottawa Senators as they will be in action on Saturday, in a tilt against the Minnesota Wild, some players were taking part in an important event at the Canadian Tire Centre on Thursday night.

The Senators were hosting the Skills competition in which teammates face off in different activities. All proceeds support the work with children and youth by the Ottawa Senators Foundation.

Speaking of which, the Foundation proudly showed off a cheque for the amount of $40, 000, and needed all of the assistant captains, Mark Stone, Matt Duchene and Zack Smith to join them at centre ice on the carpet for a photo.

The three players made their way to the carpet when poor Smith wiped out and fell hard after tripping on the carpet. Stone and Duchene started laughing and Smith knew it was too funny not to laugh. He waived at the crowd, who first gasped when he went down, only to join all three forwards in laugher.

The Senators even made fun of the situation when they posted the footage on Twitter, adding the comment: Skills hadn’t technically started yet so this doesn’t count.

When I see this, I can only think of what Montreal Canadiens pest Max Domi would have to say about this. When the Habs and Senators faced off earlier this season, Domi issued out one of the best chirps we've discovered in quite some time. Domi was seen mouthing "Waivers" to Smith, who cleared waivers earlier this season.