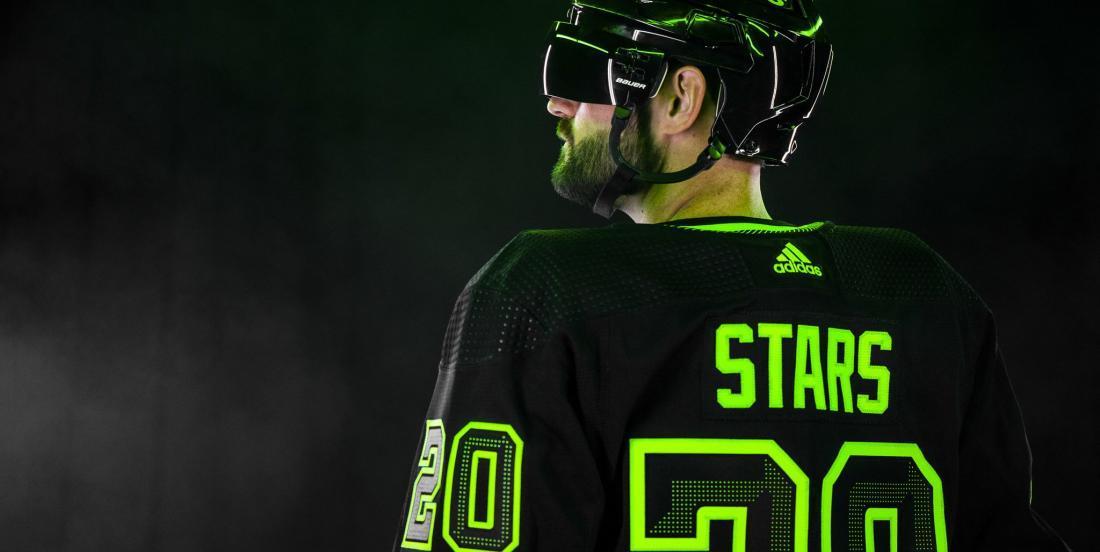 The Dallas Stars have gone all out with their new jersey and we cannot wait to see what you think of them! On Wednesday, the Stars unveil the Blackout third jersey, marking the first time since 2006 that the franchise will enter the season with three uniform options.

The Blackout alternate jersey, which is inspired by Dallas and designed for Texas.

Here is how the team in partnership with Adidas Hockey described the latest addition to the Stars’ players wardrobe:

The Blackout alternate uniforms are a return to the team’s roots, re-establishing black as a primary jersey color. During the first 20 years in Dallas, the Stars used black as a base color in their jersey. They also feature the introduction of a bold new color in Skyline Green. Inspired by one of the most iconic skylines in the world, Skyline Green is synonymous with the city of Dallas.

“The jersey design committee was tasked with finding a way to incorporate the heart of the city of Dallas and the spirit of Texas into a uniform,” said Alberts. “Today is an exciting day as we have worked hard over the last two years at creating a third jersey that will make our fanbase proud, and with the help of Adidas Hockey, we feel like the Blackout third jersey will do just that. The Dallas skyline is iconic and introducing Skyline Green into our uniforms is a vibrant reminder our great city.”

The State of Texas mark will be used for the first time on the crest of the sweater. The team also shared the full description of each piece and what makes them stand out:

Skyline Green: We are proud to present a bold new color into our jersey lineup, inspired by one of the most iconic skylines in the world, right here at home in Dallas.

Back In Black: During the first 20 years in Dallas, the Stars used black as a base color in the jersey. Our Blackout alternate uniform reintroduces the primary jersey color into the Stars jersey heritage.

State of Texas Crest: This jersey was designed for all who call Texas home, and those who take pride in hailing from our great state. The State of Texas mark adorns the jersey crest with perforations to mimic the bevel of the mark on which it is inspired, giving it depth and texture.

Hangar Effect: Completing the Texas-theme, the inside of the collar is emblazoned with the 'Come and Take It' flag, replete with cannon and star in black on a Skyline Green field. The same design as the 1835 flag fashioned by settlers of Gonzales, Texas in the first military engagement of the Texas Revolution.

Stripes: The striping pattern on the sleeves and hem take on the new Skyline Green color while staying true to the traditional home jersey pattern.

Helmet: The Stars primary logo that has been used since 2013 is replaced with the 'Dallas Stars' wordmark for the first time in Skyline Green.

Pants: To complete the overall look, the side striping and State of Texas crest on the leg have been eliminated in a minimalist approach to focus all attention on the new jersey.

Gloves: All black gloves were added to complete the overall look with custom stitching in Skyline Green.