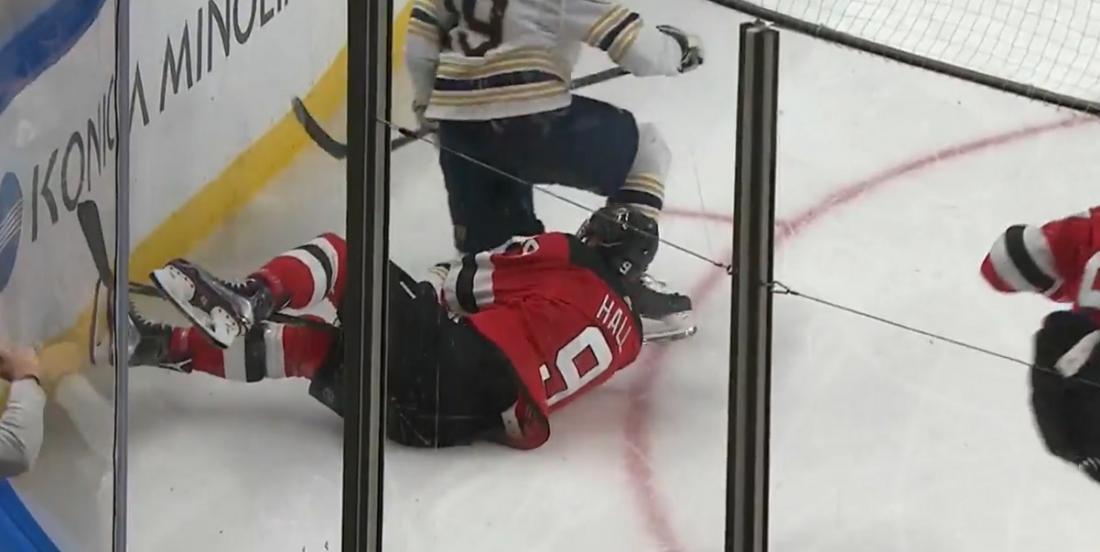 You have to wonder what New Jersey Devils star forward Taylor Hall was thinking here, especially given his long history of injuries.

On Saturday night Hall and his Devils were facing off against the Buffalo Sabres and as it turned out it was a pretty ugly night for the Devils. Not only did the Devils fail to secure so much as a single point but they were also blown out by the Sabres by a score of 7 - 2, a rather ugly looking scoreline when you think back to just how poor the Sabres were at times towards the end of the 2018 - 2019 National Hockey League regular season.

In spite of the ugly loss though the bigger concern for the Devils coming out of this game may be the health of the aforementioned Taylor Hall. That's because late in the second period Hall made a rather head-scratching decision when he attempted to lay the body on Buffalo Sabres veteran Jake McCabe. The 25 year old Sabres defenseman is of course a much bigger man that Hall however and perhaps more importantly he is a much more physically dominant player on the ice than Hall will likely ever be, which makes you wonder what was going through Hall's head when he lined up McCabe for this hit. Line him up he did however with roughly just 6 minutes left in the second period, and that would prove catastrophic for Hall.

If you watch it happen in real time it looks like Hall is about to catch McCabe with plenty of momentum behind him and it looks like Hall has the chance to lay a fairly punishing hit, but McCabe obviously had other plans. McCabe either saw Hall coming the entire way or caught sight of him just in time to prepare himself for the impact, because the result was a massive reverse hit on the part of McCabe, one that left Hall reeling on the ice for several long moments.

Hall would leave the game following this hit and no doubt was forced to enter the NHL's concussion protocol given the body language he displayed following the massive impact from McCabe. There has been no update from the Devils' on the status of Hall at this time, but we will be bringing you that information as soon as it becomes available.