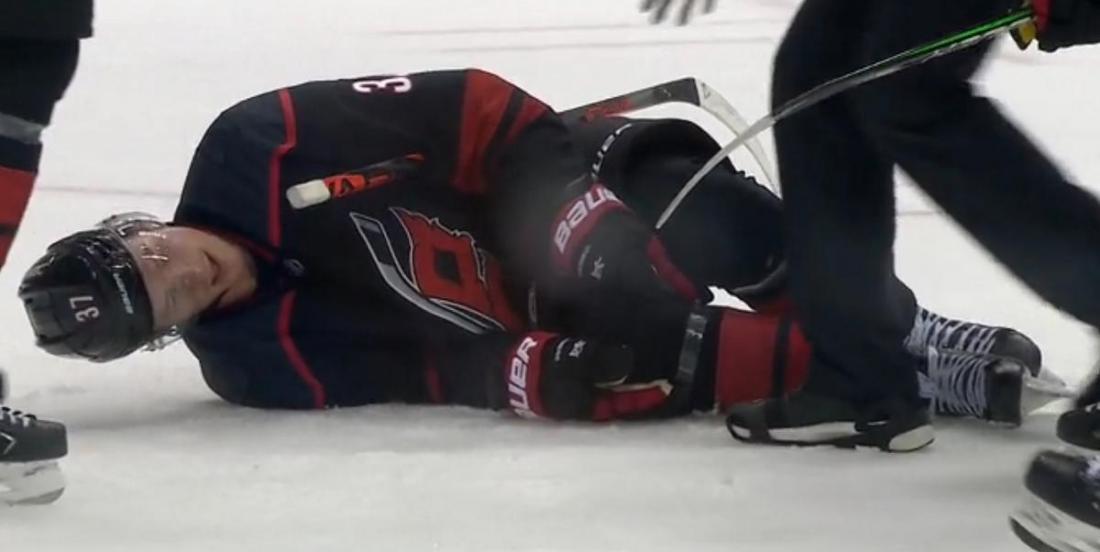 On Saturday Hurricanes forward Andrei Svechnikov suffered a gruesome looking injury when he fell awkwardly after a battle in front of the Bruins net against Bruins captain Zdeno Chara. Although both Chara and Svechnikov were jockeying for position in front of the net the injury was caused when Svechnikov found himself off balance and tried to adjust by planting his weight on his leg. Unfortunately the momentum of his fall was carrying him in a direction that his leg simply was not meant to handle, and the result was a sickening twist of Svechnikov's leg and ankle as he fell to the ice.

Although I wish we had some good news to deliver on the Svechnikov front it now sounds like things are indeed as bad as they looked during Game 3 on Saturday. According to a report from Hurricanes beat reporter Sara Civian of The Athletic, Hurricanes head coach Rod Brind'Amour informed reporters on Sunday that he was not expecting to see Svechnikov back during these Stanley Cup playoffs. I must stress here that this was not an official update on the part of Brind'Amour and furthermore he indicated that he would wait for the results of the MRI before making his comments on the situation official, however he did say that he "highly doubts" we will see Svechnikov again in the 2020 playoffs.

I'll be honest with you Hurricanes fans I do not see a silver lining here, the only thing I can say is that given how bad things look on Saturday when the injury happened I think that most of the Canes fan base has already resigned themselves to the fact that Svechnikov's injury is a pretty bad one. Given the league's rules regarding reports on player injuries we have no idea what kind of injury Svechnikov actually suffered, but if I had to venture a guess I would probably lean towards some type of MCL or ACL injury given both the visual of his leg bending badly as well as the fact that Svechnikov appeared to be clutching at his knee following his fall.