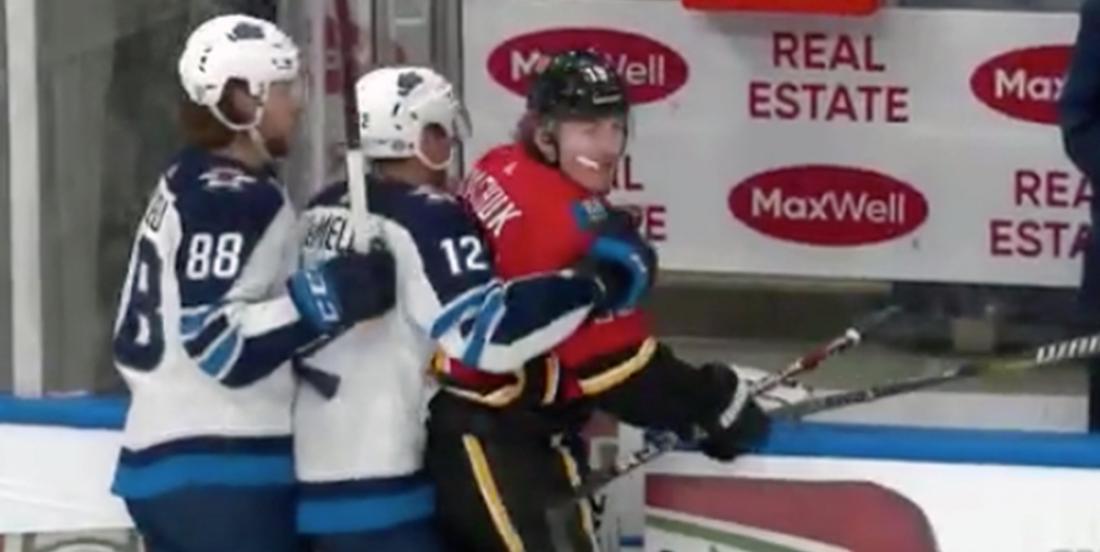 If there's anyone who came prepared for the start of the Stanley Cup Playoffs it's Calgary Flames forward Matthew Tkachuk. The 22 year old Flames forward made himself the story of the game in Game One of his team's qualifying series against the Winnipeg Jets after he got tangled up with Jets forward Mark Schiefele, leading to a potentially gruesome injury for Scheifele.The Flames walked away with a 4-1 victory, but all anyone could talk about after the game was Tkachuk's hit on Scheifele and the resulting injury.

See that? Watch Tkachuk's foot as he goes into the boards. His skate blade appears to catch the back of Scheifele's leg, narrowly missing his achilles tendon. Scheifele left the game and didn't return, but doctors have confirmed that he did NOT suffer any damage to his achilles. Still, he's out for today's matchup and with the Jets down a game in the series, they're desperately missing his presence. Jets head coach Paul Maurice was clearly NOT happy with Tkachuk after Saturday's game, while Tkachuk himself played things off as a total accident:

One thing's for sure though, Tkachuk is living rent-free in the Jets' head right now. The guy is so, so, so good at changing the narrative of things and taking his opponent's focus off of what really matters. After all, who can worry about scoring goals when Matthew Tkachuk deserves a good punch in the mouth, right?

Need further proof? Here he is in today's game absolutely driving the Jets crazy as they attempt a line change.

Ah, the old "Oh... am I in your way? Sorry, about that. Oh... am I still in your way? I'm dreadfully sorry..." routine. Act dumb, look dumb and take your opponent's focus off of the play. That's textbook playoff hockey right there. The Jets either need to find a way to neutralize Tkachuk's on-ice behaviour themselves or they need to completely ignore these type of tactics and stick to their game plan. Given how effective Tkachuk is at playing his own brand of hockey though, that's easier said than done.