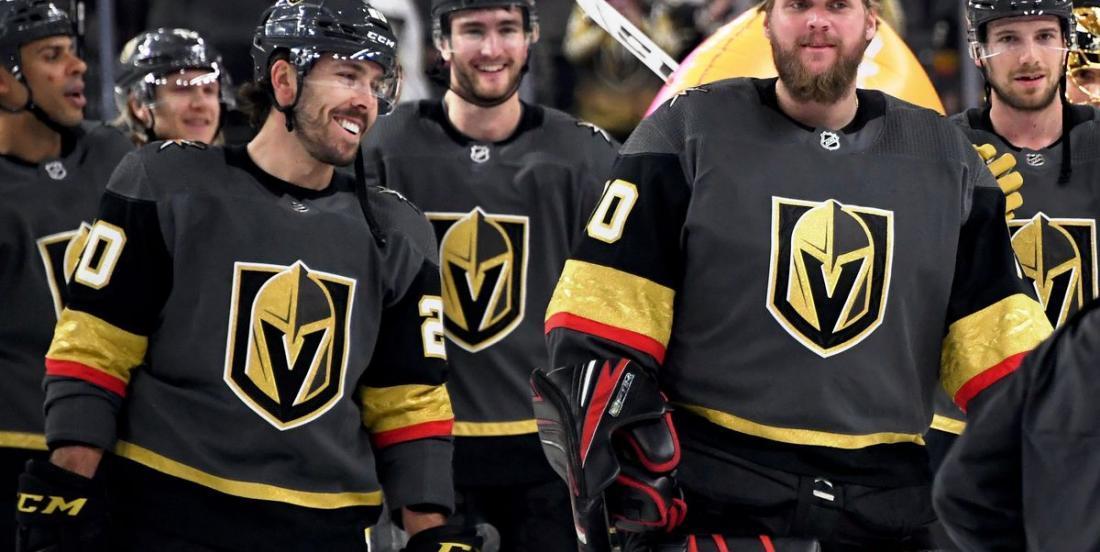 Update: shortly after this article was published, the Vegas Golden Knights traded Nat Schmidt to Vancouver for a third-round pick. The Knights are now cap compliant for the offseason.

With word Monday night that the most sought after free agent in the NHL landed with the Vegas Golden Knights on a big, new contract, the team is now truly in cap hell, at least in the short-term. Vegas was very close to the cap ceiling prior to signing Alex Pietrangelo agreeing to a seven-year deal worth $8.8 million (AAV). According to the excellent website CapFriendly.com, "the off-season upper limit is $89.65M, (10% above the upper limit). "We currently estimate Vegas' off-season cap at $82,930,536. That would leave them $6,719,464 in off-season cap space.Meaning Pietrangelo would either need to sign for $6.7M AAV, or Vegas has to trade someone."

CapFriendly added on-season and off-season cap limits are not the same, and Vegas can be over the upper limit by 10 percent until the new season begins.

There is no way Pietrangelo will take less than what he agreed to, so the only option is a trade. The tricky part for Vegas is figuring out who to move. Right now, every other NHL GM knows the Golden Knights are desperate to move someone so, for them, it's a buyer's market. The easy answer, in a perfect world for Vegas, would be trading Marc-Andre Fleury for picks and/or prospects. Unfortunately for them, they've been attempting to get rid of him and his salary for weeks and there are no takers at his full value of $7 million AAV. Other teams want Vegas to retain a portion, anywhere from 33 to 55 percent of his salary, which makes things very tough. Vegas is desperate, but they can't be stupid. Another rumour has Nate Schmidt on the block, with a deal with Florida said to be in place this week but Schmidt used his modified no-trade clause to nix it. Schmidt's cap hit is $5.95 million.

According to TSN's Frank Seravalli, other names included in trade rumours include Rielly Smith, Max Pacioretty, Alex Martinez and Jonathan Marchessault. It's hard to imagine Vegas parting with Pacioretty unless they absolutely had to. He's is coming off one of his best years in the NHL, netting 32 goals and 34 assists for 66 points. Marchessault had a bit of an off year production-wise, but was still solid at 22 goals and 47 points in 61 games.

Right now, there are just four defencemen in the NHL on a larger contract than Pietrangelo. These are Erik Karlsson ($11.5M AAV), Drew Doughty ($11M AAV), Roman Josi ($9.06M AAM) and P.K. Subban ($9M AAV). Pietrangelo likely had offers from several teams that were at least in the same ballpark and he's earned it over the last few years. $8.8 million will look much different when Pietrangelo is 36 and 37, though. Worsening it is his full no-movement clause.

"Our assumption is that the contract was signed after 5:00pm ET and therefore will not be officially registered by the league until tomorrow [Tuesday]. "This would then buy Vegas some additional time to make the necessary space required to accommodate Pietrangelo’s AAV under the cap," said CapFriendly. The team will need to get more inline with the upper limit before Pietrangelo's signing is officially registered with the league. Of course, once the regular season starts again (whenever that is), Vegas will need to get down to $81.5 million, or face massive fines from the NHL.