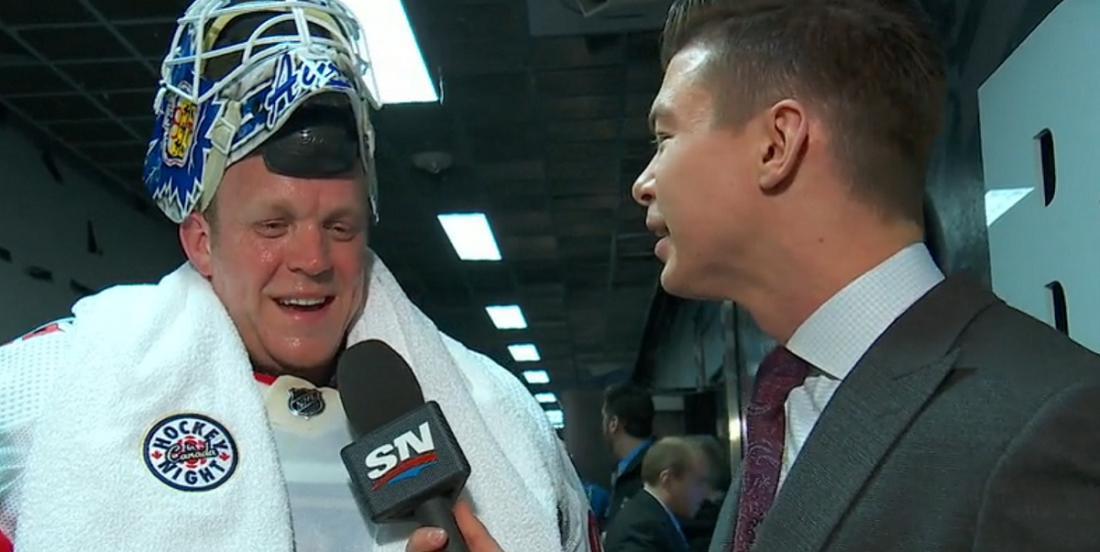 It was probably the most stressful night of his life initially, but this has turned into a dream come true for 42 year old goaltender David Ayres. Ayres, a lifelong fan of the Toronto Maple Leafs, was forced to suit up for the Carolina Hurricanes and play against his beloved Maple Leafs on Saturday night when the Hurricanes unexpectedly lost both their starting and backup goaltenders to injury during the course of the game.

It was actually former Toronto Maple Leafs goaltender James Reimer who started the night out in goal for the Hurricanes but he quickly went down in the very first frame with what is now being called a lower body injury and his teammate Petr Mrazek would not last much longer in net. Mrazek was taken out by Toronto Maple Leafs forward Kyle Clifford when Clifford just bulldozed him as he came way out of his net in an effort to play the puck. Clifford himself was also clearly trying to make a play for the puck on this one, and in his defense Mrazek was closer to the blue line then his own net when the two men collided, but the end result was a collision that more closely resembled a car crash than a hockey play.

That set the stage for Ayres to make his National Hockey League debut and what a debut it would prove to be. Ayres started things off very shaky by allowing 2 goals on the first 2 shots he faced on the evening, but after some words of encouragement from his Hurricanes teammates he quickly found his groove and would hold down the fort for the remainder of the game. By the time it was all said and done Ayres had set a number of NHL records and was even named the game's 1st star of the night, a moment that must have been incredibly special for a man who has likely dreamed of having a moment like this in Toronto for a very, very long time.