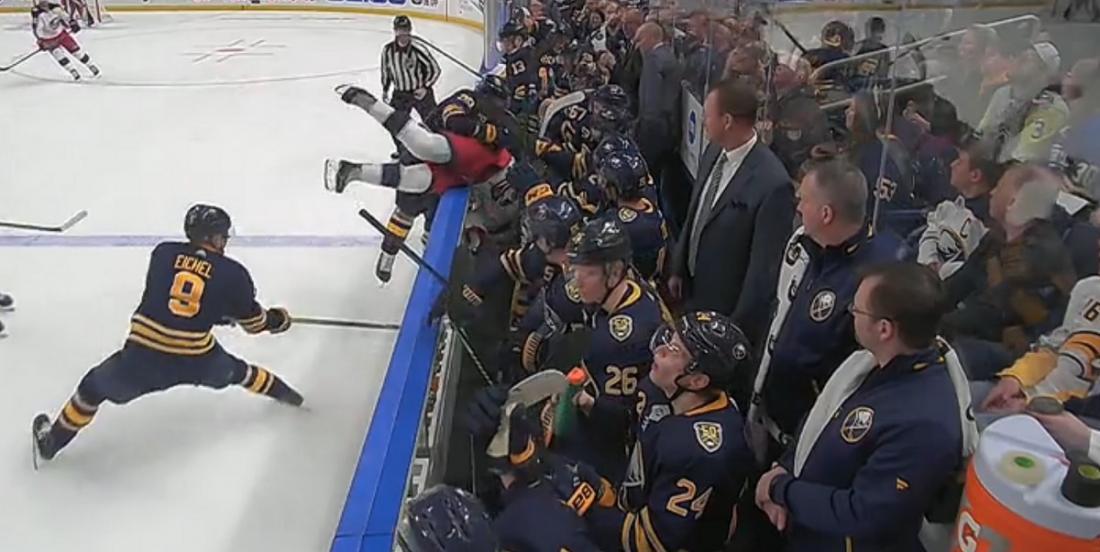 The Rangers are facing off against the Buffalo Sabres on Saturday and through two periods of play the Sabres have a one goal lead. Although this one is not over yet as both sides still have another 20 minutes to play at the time of this writing, the Sabres have just set a message to the Rangers ahead of the game's third and final period.

There were just seconds left on the clock in the second period when Buffalo Sabres forward, and Latvian legend I might add, Zemgus Girgensons delivered a big time body check to the aforementioned Gavrikov. Gavrikov was making a play along the boards and was right in front of enemy territory, the Sabres bench, when out of nowhere Girgensons leveled him with a big it that sent Gavrikov's torso over the boards and into the Sabres bench. Luckily for the Rangers blue liner he did not get completely dumped into the Sabres bench, however he was left hanging over the boards with half his body in the bench and the lower half of his body left dangling over the ice. All in all it made for a pretty funny sight, although I suspect that Gavrikov may not have enjoyed the moment as much as the rest of us did.

Much to the credit of the guys on the Buffalo Sabres bench here, no one tried any funny business when Gavrikov came over the boards, and if anything the Sabres players only put their hands on the Rangers defenseman in an effort to help him get back on the ice. There was an official that was right on top of the situation so that may have also played a factor in the Sabres playing so nice here, but nonetheless it was a good show of sportsmanship on their part and should be recognized.

As I stated earlier this one is not over just yet so both the Rangers and Gavrikov will have their chance to get revenge before the clock has completely run out. Whether they do that in the physical game or on the scoreboard remains to be seen.