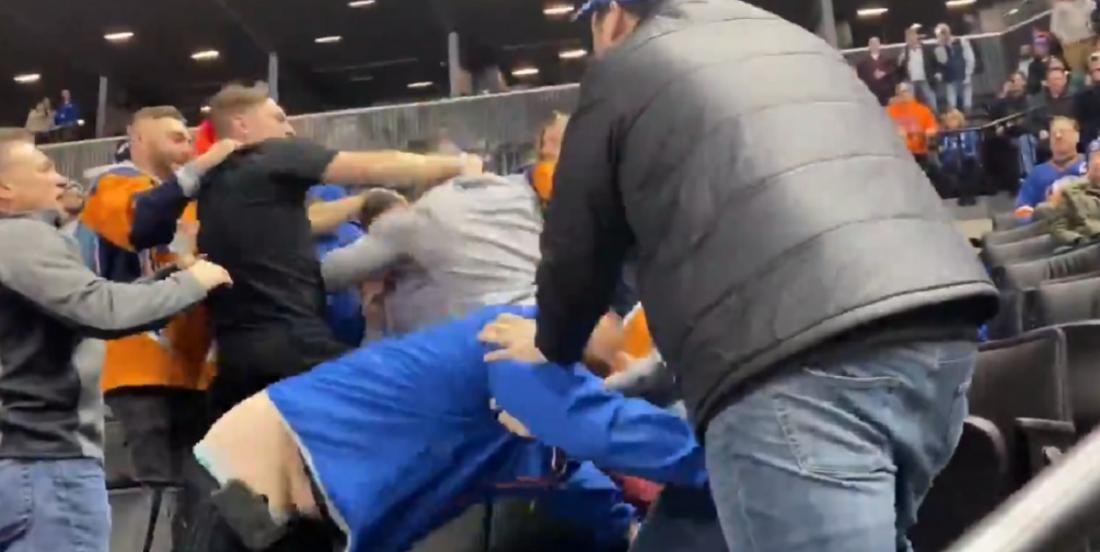 Brawl breaks out in the crowd.

Can't we all just get along? No, probably not.

Although our love of sports usually unites us sometimes the passion of the game can carry over into other avenues that can lead to all of us being less friendly than we would normally like to be. Add in alcohol as well as the heated atmosphere of a live sporting event and it things can turn ugly in the blink of eye, something that appears to have been the case over the weekend at one of the National Hockey League's games.

Multiple videos have now surfaced showcasing a wild brawl that occurred at the Barclays Center during what is allegedly the Saturday night game between the New York Islanders and the Columbus Blue Jackets. At this time is it unclear what started the brawl and it is also unclear if these are rival fans, or just a group of New York Islanders' fans that simply did not get along with one another. What we do know for certain however is that we now live in a world where everything you do is bound to be recorded as there are now no less than 3 different angles of this one incident circulating on social media. That's right 3 different people were quick enough to pull out their phones and immediately begin recording the crazy event around them and then all 3 uploaded it to social media.

There are several people involved in this altercation and there are several blows thrown here by multiple people and at multiple people as well. Perhaps the most disturbing part of the video is the one man towards the end who begins hollering "woo" over and over like some kind of possesed maniac. Again I highly suspect that alcohol was involved here, given that a lot of the people here seemed to be less than steady on their feet during the time the altercation was unfolding.

Here's the original video we stumbled upon:

Another user on social media identified only as Valueman then published a second angle of the brawl.

Last but not least we have a third and final angle from a man named Mike.