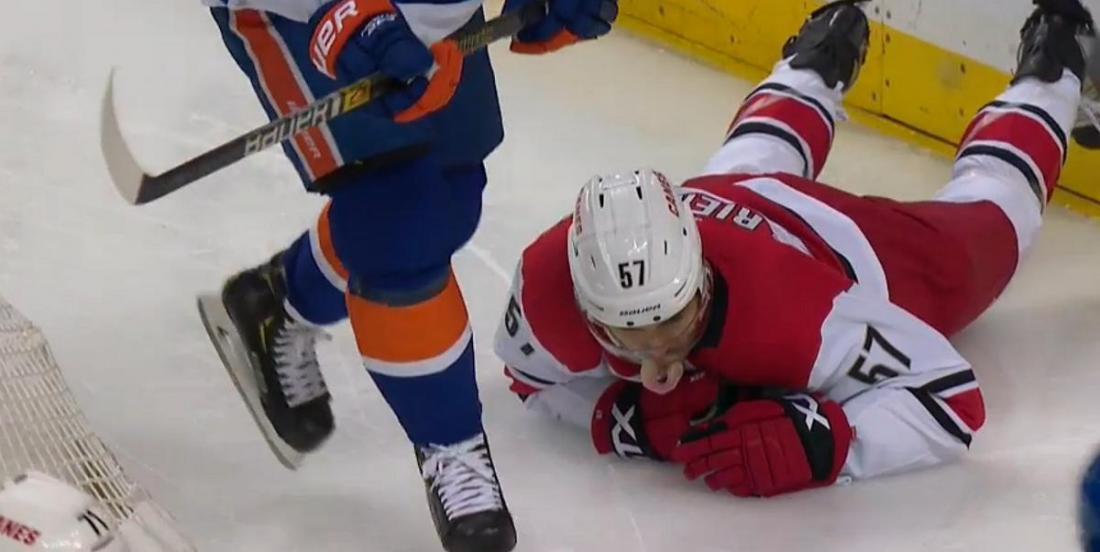 The New York Islanders were looking to send a message early on Sunday and they may very well have done it.

In the opening seconds of Game 2 of their second round series against the Carolina Hurricanes in the 2019 Stanley Cup Playoffs, the Islanders effectively took out a hugely important piece of the Carolina Hurricanes roster. That came courtesy of New York Islanders forward Cal Clutterbuck, a player known for his ability to deliver a punishing body check, and it came hard and fast.

Roughly just 30 seconds had transpired in the game when Clutterbuck absolutely pancaked Hurricanes defenseman Trevor van Riemsdyk, leaving the defenseman in a great deal of pain on the ice. The Hurricanes blue liner immediately abandoned his stick on the ice and was in obvious agony, but it was not until he began to skate towards the bench that it became clear something was very wrong. van Riemsdyk could be seen clearly favoring his left shoulder, in fact he was outright clutching at the shoulder with his right hand, as he slowly skated back over to the Hurricanes bench.

I have to admit I was a little surprised to see van Riemsdyk attempt to sit down on the bench, but that would not last for long as he was eventually forced to retreat to the Hurricanes locker room. There of course has been no official update on van Riemsdyk status at this time so it's very hard to gauge how serious this situation may be, but it certainly looked very bad.

When Clutterbuck came in to deliver the hit van Riemsdyk looked like he attempted to brace himself for the impact, extending his arm and lowering his body to adsorb the blow. It may have been that decision that would cost him however as it left his left arm trapped awkwardly between his own body and the boards and Clutterbuck made his best attempt to fuse the two together. Unfortunately the boards do not have all that much give to them and as a result it appears that van Riemsdyk's shoulder, or perhaps his collar bone, took the worst of that impact.

This is one that could have an impact well beyond this series should the Hurricanes manage to advance.